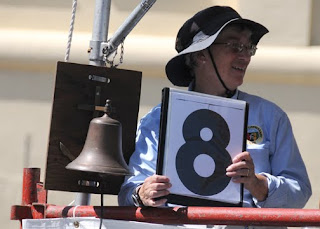 If you've been racing for some time, and you live in the Mid-Atlantic region, you'll recognize the woman in this picture.  If not, it's Ellen Dorsey, UCI National Commissaire (that's an Official for those of you that don't know what a Commissaire is). from Bethlehem, PA.   I've had the pleasure (and honor) to work with Ellen this past weekend at the ECCC College Racing Series at Rutgers University.  (That is, in addition to working and learning under other officials who I have a lot of respect for including: Judy Miller, Alan Atwood, Rob Hendricks, etc.)  You guys/gals that race have NO IDEA how hard these officials work, including behind the scenes, before, during and AFTER the race.

Look at the photo of Ellen above.  You think she just flips the lap cards each lap of a Crit Race and rings the bell on the final lap.  Right?  Nope!  The reason she's looking left is because she's memorizing the numbers of each racer as they fly by at 25+ mph.  She has to write them all down for EVERY lap of the race.  And, I'm not talking a couple numbers I'm talking up to as many as eight numbers.  That's right, 8 numbers.  I'm lucky if I can memorize 3.  (Now you guys/gals know why it's so IMPORTANT that your bib numbers are displayed properly and not bent, crinkled, mutilated, etc.?)  In addition to memorizing bib numbers she is also timing NOT ONLY the lap times but the splits in groups for each lap...so she can see if groups are gaining or losing ground on the lead group/break.  And, this is not done automatically this is done by a stopwatch that is hanging around her neck (that you can't see in the photo). That's not it folks..in addition to doing that, she's also keeping track of lapped riders and riders that enter and leave the "wheel pit" as well as riders that crash and/or pull out of the race.  There is no time for lunch breaks and no time for potty breaks either.  When the race is ON..you're busy (non-stop) for the entire race.  BTW, Ellen is one of the nicest women I have ever met..so be nice to her.

Next time you guys/gals race..don't forget to stop at the Officials table before you leave for the day and thank the Officials for doing their best to conduct a SAFE and FAIR race for all.  They really like hearing that.  Trust me, there isn't an Official out there doing it for the money.  They're doing it for you and the love of the sport.  For that matter, thank ALL of the volunteers that are helping out with the race.  I'm sure there are plenty of other things they'd rather be doing that day than watching you race around in your spandex cycling tights.

Power ON! Coach Rob
Posted by Rob Muller at 9:18 AM