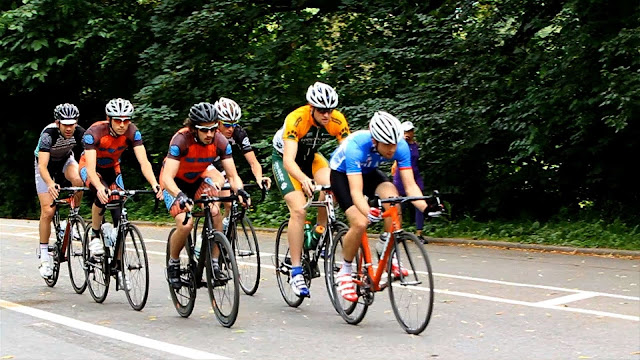 Well, I have to pat myself on the back..since no one else will..haha.  I started getting back on the bike a little less than a year ago (from a long layoff) and I've gone from being a C- rider to a B+ rider- in that time.  That's right, when I started, I was so out of shape I had a hard time keeping up with the C group rides in my area.  (That's why I rated myself a C-.)  I kept up, but my legs were tired.  The only good thing I had going for me last year is that I only weighed 160 lbs.  So, when we hit the hills I dropped all the fatty Patty's on a C ride.  Since then, I've only gained 5 lbs. which doesn't seem to hurt me on the hills.  I've also increased my FTP from a 180w to 225w.  My goal is to increase my FTP from 225w to 250w by July of this year.  My highest FTP was 275w.  That was about 9 yrs. ago though.  I don't think I'll get up there again.  Who knows.  Maybe I will..maybe not.  If I don't I won't be disappointed.

I'm satisfied riding with the B group riders.  Most of the B riders are older riders like me.  Hell, most of the riders on all the group rides are older.  I'd say the average age for the A riders is 40, and the average age for the B riders is 50, and the average age for the C+ riders is 60.  Right now, I'm probably one of the stronger B riders..which is why I give myself a B+ rating.  I used to ride with the A group but then again, that's when I was age 50 and my FTP was at 275w.  The problem riding with the A group riders is the fast pace lines.  All it takes is one person to touch a wheel in a pace line and they'll take out everyone behind them.  Plus, after you go down, you hope to God a car doesn't run your ass over.  I've been in fast pace lines at 28-30 mph and witnessed guys crashing and breaking collar bones and/or arms.  Not pretty.  Plus, when you ride in an A group you never know who is going to show up.  You could have a Cat 1 racer show up to an A group ride, or a professional triathlete.  Been there done that.

Back in the day, if I rode in a group...it was with a bunch of friends that I knew.  Most of the time, I rode/trained by myself.  It's just easier to go out and ride when you can...rather than riding in a group and only riding at a designated time.  But, there is safety in numbers when riding with a group..unlike riding solo.  That's why I prefer riding in a group now- safety.

So, get out and ride solo or ride with a group.  The weather is warming up nicely these days.