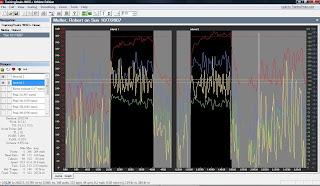 Pronounced "two by twenties". So, what's so great about 2x20's? Well, if you're NOT doing these intervals you're probably NOT taking advantage of one of the best indoor/outdoor workouts for increasing Functional Threshold Power...especially if you do them at Level 4. I wouldn't recommend doing them without working up to them first. Either do 2x10s at L4 first or do the 2x20s at the Sweetspot Training Levels until you get in better shape. Here's what the profile should look like if you do them on the road. Notice that the first 20 minute interval was done just below my LTHR of 175 bpm. Also notice the Heart Rate creep...which is normal. The 2nd 20 minute interval exceeded my LTHR. Couple of things you shouldn't do..that you can see here: 1) do NOT take a 45 minute break between intervals like I did..that's WAY too much. However, to come to my defense, I stopped to grab a drink and ended up talking to a friend. And, 2) Don't let the Power on the 2nd interval drop more than 5% of the first. I was close on the second interval. BTW, if you do them inside, expect at least a 10% reduction in FTP power. Have fun!
Posted by Rob Muller at 1:36 PM No comments:

Are you "Sweet Spot" Training?

During my weekly local "Power Advantage Program" training sessions I'm preaching/advocating Sweet Spot Training Intervals. Why? Because they work. i.e. they improve cycling performance. It doesn't take a rocket scientist to figure out that most of the physiological adaptations that are responsible for improve cycling performance are centered between the L2-L4 training zones/levels. Are you "Sweet Spot" Training? If not, you should be..because this is the PERFECT time of the year to be doing them. 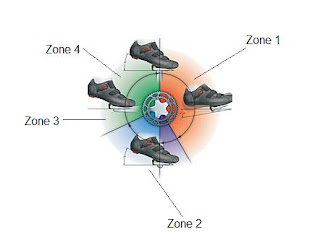 The Perfect Pedal Stroke
How to get the most energy from each crank revolution.
By Loren Mooney
©TopDog Illustration

Pedaling in a simple circle is a complex thing, but mastering it can save energy, says Todd Carver, biomechanist at Colorado's Boulder Center for Sports Medicine. He says that with proper ankling (shown here; not the injury-causing technique of the past), riders can churn out the same amount of power at a heart rate as many as five beats per minute lower. This stroke is for flat terrain at threshold, or time trial, intensity.Hip-Knee-Ankle Alignment Viewed from the front, your hip, knee and ankle should line up throughout the pedal stroke. "You don't want knee wobble," says Carver. "Just think pistons, straight up and down." If you can't correct this, or if you experience knee pain when you try to restrict lateral movement, you may need orthotics or another type of biomechanical adjustment.

Zone 1 Known as the power phase, the portion of the pedal stroke from 12 o'clock to about 5 o'clock is the period of greatest muscle activity. "A lot of people think hamstrings are used only on the upstroke," says Carver, "but a good cyclist uses a lot of hamstring in the downstroke, because it extends the hip." The key to accessing the large muscles in the back of your leg is dropping your heel as you come over the top of the stroke, says Carver. "At 12 o'clock, your toes should be pointed down about 20 degrees, but as you come over the top, start dropping that heel so that it's parallel to the ground or even 10 degrees past parallel by the time you get to 3 o'clock." The biggest mistake Carver sees in novice riders: not dropping the heel enough in Zone 1.

Zone 2 Using the same muscles as in the power phase, but to a lesser degree, this phase acts as a transition to the backstroke. "As you enter Zone 2, think about firing the calf muscles to point your toe," Carver says. As you come through the bottom of the stroke, the toe should be pointed down 20 degrees. "This ankling technique transfers some of the energy developed in Zone 1 by the bigger muscles to the crank," Carver says. He uses the advice popularized by Greg LeMond: "Act like you're scraping mud off the bottom of your shoe."

Zone 3 Even though you feel like you're pulling your foot through the back of the stroke, you're not. "When you look at even the best cyclists, they're losing power on the upstroke," says Carver. "The pedal is actually pushing your leg up, so the goal is to lose as little power as possible and get that foot out of the way." One fun way to improve the efficiency of your upstroke: mountain biking. "The terrain keeps you honest," Carver says. "If you're focusing only on the downstroke, you'll lose traction and fall off your bike in steep sections." As for other exercises, Carver advises against single-leg pedal drills--"for recreation-level riders, they injure more people than they help"--but recommends hamstring and glute-strengthening lifts, as well as squats, "done correctly, in a squat rack with someone showing you how."Saddle Position Proper bike fit, especially saddle height and fore-aft adjustment, is a prerequisite for a smooth pedal stroke. Without it, says Carver, you won't be even remotely as efficient as you could be. "If your saddle is too high, you're not going to be able to drive your heel effectively," he says. "If it's too low, you'll have knee pain." In the right position (knee over the ball of your foot with the pedal at 3 o'clock; knee slightly bent with the pedal at 6 o'clock), you'll maximize your energy output and also be able to adapt your ankling technique to different terrain, cadence and effort levels.

Zone 4 As you enter the second half of the upstroke phase, think about initiating your downstroke. "Many riders don't initiate early enough," says Carver, who often sees riders wait until 3 o'clock--but they should be starting before 12 o'clock. A tip: As you begin to come across the top of the stroke, think about pushing your knee forward, toward the bar. But only your knee, says Carver: "Your pelvis should remain a stable platform, not sinking down and not moving forward." As the knee comes forward, you should feel your hamstrings and glutes engage, and your hip extend.
Posted by Rob Muller at 9:21 AM No comments:

Colorado Springs, Colo. (December 4, 2008)—The sport of competitive cycling in the United States continues to grow according to the latest figures released today by USA Cycling.

For the sixth consecutive year, the number of licensed competitive cyclists has risen compared to the previous year, while the number of registered clubs and event sanctions also increased. Collectively, these categories represent the popularity of bike racing in America from a participation standpoint.

The growth in membership continues a six-year trend which has seen the number of licensed racers in America increase by 48% since 2002. Over that same period of time, the number of events sanctioned by USA Cycling has risen by 50%, while affiliated clubs have grown by 30%.

Many of the sport’s insiders point to the success and popularity of American athletes in cycling’s most notable events, such as the Tour de France and the Olympic Games, as a primary factor in the sport’s recent boom. The most significant growth occurred throughout Lance Armstrong’s dominant seven-year winning streak at the Tour de France between 1999 and 2005, while success by several other Americans on the sport’s biggest stage since then has encouraged continued interest. If history is any indication, cycling is poised for similar growth in 2009 following a five-medal performance in Beijing – the most successful ever for a U.S. Cycling Team at a non-boycotted Olympic Games – as well as a return to competitive cycling and the Tour de France by Armstrong. Factor in the 13 major internationally-sanctioned professional men’s and women’s races set to take place in the U.S. next year, as well as Armstrong’s commitment to race in February’s Tour of California, and the notoriety of the sport on U.S. soil next season is sure to reach new heights.

“Once again, we’re excited to witness continued growth in the sport of cycling,” commented Steve Johnson, CEO of USA Cycling. “The market for amateur sport in the United States is a competitive one with so many choices and opportunities available to athletes these days. That said, to experience another year of increased participation is very rewarding. Looking ahead, with the continued expansion of professional cycling opportunities both domestically and abroad, we hope and expect this growth trend to continue throughout 2009 and beyond.”

Broken down by specific disciplines and types of licenses, road, track and cyclo-cross grew by 3.2%, while mountain bike increased 1.2%. The number of professional riders in the U.S. rose 6.3% and the amount of student-athletes competing for collegiate clubs jumped 2.5%. Of all of its licensees, USA Cycling’s largest increase was in the number of licensed bike race officials, a figure that rose 17.6%.
Posted by Rob Muller at 6:20 PM No comments: