I got dropped on a ride the other night.  It's not like I haven't been dropped on a ride before, but when I did, it was usually to younger stronger riders, not a bunch of old farts (including a woman on a mountain bike that looked to be 60ish).  No disrespect to the old (fart) riders that dropped me because they were old "strong" riders (stronger than me..that's for sure).  My ride was a Tuesday night Central Bucks Bike Club ride on the canal path.  I rode my Specialized Stumpjumper Mountain Bike with big knobbie tires.  Not only were the tires "knobbie" tires, they were underinflated (25 psi).  I didn't realize they were so low until I got home and checked them with my tire pressure gauge.  Before the ride I asked one of the regular riders what speeds they normally rode and they said normally 16 mph and sometimes 19 mph.  I was thinking to myself that I didn't even average 19 mph on my road bike..but then again, that was on the road and that included hills.  The canal path is flat as a pancake.  I should also preface this blog by saying that I'm overweight and out-of-shape too.

Anyway, back to my underinflated knobbie mountain bike tires.  When I got home I uploaded my ride from my Garmin Edge 501 Bike Computer.  I couldn't believe that all I could manage was 12 mph average on my mountain bike before reaching my Threshold Heart Rate (175 bpm).  Yes, I admit, I was/am out of shape..but I think if I were on my road bike, I would have easily been able to maintain 16+ mph..if not faster.  So, I decided to look up the rolling resistance of Mountain Bike Tires on a Mountain Bike (on the canal path) compared to Road Bike Tires on a Road Bike (on the road).  The difference is dramatic..almost a 30% difference....just what I thought.  So, having learned this, I either bring my road bike the next time I ride on the canal path, or find a way to decrease my rolling resistance on my Mountain Bike.  I chose the latter.  In addition to increasing my tire inflation pressure from 25 psi to 45 psi, I'm buying new tires with a less agressive tire pattern.  After all, most of my Mountain Bike riding will be on dry hard pack with little climbing in wet/muddy conditions.

I purchased two (2) Continental Race King Sport Protection Mountain Bike Tires.  I'm a big fan of Conti's especially their Grand Prix 4000 road tires.  Conti's are made in Germany..at least the tires I buy with the Black Chili compound are made there.  Once I mount them I'll do a comparison to the stock knobbie tires I have now.  I'm sure the new tires will be much faster. I wish I had a Power Meter on my Mountain Bike to give a more accurate comparison..but I don't, so I'm going to use my Heart Rate vs. Speed. 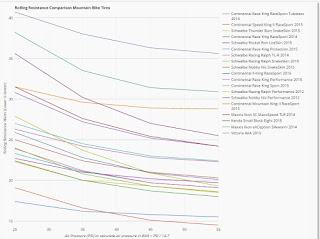