Saw this article and was surprised that the President rides with a Power Meter too:

As in almost every weekend when he is in town, President Bush's motorcade left the White House early Saturday for the Secret Service training facility in Beltsville. There he blew off steam the way he has for four years now, ever since doctors warned him that running was killing his knees: a hard, determined, mountain bike ride.
Bush's love of biking has been well documented, especially by biographer Robert Draper, who writes in his recent book about the Bush presidency of the inordinate efforts by the agents and aides to find trails for the president while traveling. "I like to stay fit," Bush told Bicycling magazine in 2005. "I think you can do your job better if you're fit."

President Bush has eight to 10 regular participants in his weekend mountain bike trips. One called Bush "a very strong rider" and said "We ride really hard." The president started the exercise to spare his knees from running. (By Charles Dharapak -- Associated Press)
What's less known is that Bush has a regular posse of eight to 10 cyclists who typically join him for his 90-minute weekend rides -- some from the White House, some from agencies, and outside friends. The White House has been circumspect about the composition of this group but recently allowed two of the regulars -- Bush economic adviser Edward P. Lazear and legislative aide Barrett Karr-- to offer a small window into Bush's exercise world.
Among others who have been known to bike with Bush, at least occasionally, are former chief of staff Andrew Card, outside political adviser Mark McKinnon and another young legislative aide, Christopher Frech.
Karr, 35, says that Bush usually takes the lead as the group heads out, but at some point the Leader of the Free World will say, "Let the dogs out" -- and the faster riders will zoom to the front, along the single-track trails at Beltsville. (Bush rode yesterday at Fort Belvoir.) "He's very respectful of everybody on the ride being able to get a good workout," she says.
As she describes it, Bush is obsessed with the metrics of biking, closely measuring the miles traversed and the calories burned. Recently, the president obtained a power meter, which measures wattage, a way to quantify how much power a rider is producing.
"It's been fun to watch him become a serious mountain biker," Karr says. "He's going over logs. He's moving fast on some very [winding] trails."
Lazear, who at 59 is the oldest in the group after the 61-year-old president, says the regular bike ride "is not just a walk in the park -- it is his opportunity in the week to get serious exercise."
"He's a very strong rider, very disciplined," Lazear said. "We ride hard. There's no question. We ride really hard."
There is not much chatting along the way, Lazear says, since many of the trails "require a lot of concentration." Bush is often listening to music on his iPod -- country music, Karr believes.
And the group rides rain or shine. Lazear and Karr tell of riding in extreme cold, with temperatures in the teens, and extreme heat, when she donned a special cooling bandanna. Sometimes, after the ride is over, the group spends a half-hour or so helping clear and build more trails, Lazear says.
"It's a great outlet for him--he gets outside. He relieves stress. He cranks up the iPod," says Karr. "It seems like a good way to balance the stress of the Oval Office."
Posted by Rob Muller at 2:26 PM No comments: 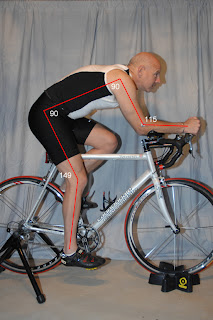 Well, educated myself the last few days with Bike Fitting for both Road Bikes and Tri-Bikes. Seems like you set them up a little differently. What I found most challenging, however, is setting up a Road Bike to be both comfortable and aerodynamic. My road bike geometry is not as upright as a Time Trial (or Tri) geometry. My seat tube angle on my road bike is 73.5 degrees compared to that of a TT bike which is more upright- around 76 degrees. Anyway, having spent some time on the fit..I think I was able to optimize my position that would be comfortable, aerodynamic and mechanically optimized for max power output. Here's a pic of my aero position. Keep in mind, as I said, that this stretched out look/position is NOT because I prefer this to a more forward position..it's just that I can't get there with my current frame geometry. Besides, I herniated my L5-S1 disc in my lower back..and it doesn't seem like I'm going to get any flatter. Guess I'll have to live with the arched/egg-shaped back for now. Oh, my seat is maxed out as high as it's going to go...and forward as well....in case you were wondering. I suppose I could shorten the stem some more (I've already shortened it to 120mm) and drop the handlebars (already have a 2.5-3 inch drop from seat top to handlebar tops) but don't want to go any lower as I will most surely compromise comfort. Afterall, I'll probably be doing group rides and long century rides 90% of the time..and Time Trials the other 10%. If anyone has any suggestions on optimizing what I believe is an already "optimized" fit for me..please let me know. Thanks Rob
Posted by Rob Muller at 1:31 PM No comments:

Whoa...Santa came early to my house as he just dropped off a set of Bontrager Race Xlite wheels with built-in Power Tap SL 2.4 Power Meter in the hub! Thanks Santa. Now all we need is some decent weather so I can get out there and try em out. http://www.bontrager.com
Posted by Rob Muller at 7:20 PM No comments: 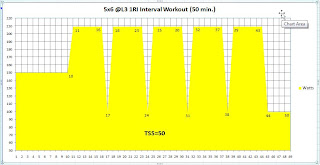 I've created some Power Based Training workouts based on the cyclists Functional Threshold Power (FTP). What, you don't know what your FTP is? If not, contact Todd@TWileySports.com to schedule an FTP test. Anyway, here is a sample 5x6 @L3 Interval Workout based on FTP. This is a good workout for this time of the year. Email me, Coach Rob at: mullerrj@comcast.net and I'll send you a workout based on your FTP.
Posted by Rob Muller at 2:16 PM No comments:

It amazes me the time (and money) that is spent by cyclists on their bikes by reducing the bike weight. Just look at all the cyclists these days that buy NEW state-of-the-art bikes that look cool and fast and are lightweight. Or look at the cyclist that is buying carbon fiber bottle cages to save a few grams...in order to reduce overall bike weight to go faster. Do these people realize that reducing aerodynamic drag is a BETTER way (and cheaper way) of going faster? So, it got me thinking: have these people been "properly fitted" to their new machine? When I say a "proper fit", I'm talking about a position on the bike which not only maximizes "comfort" and "power output" (or pedaling force), but that is also "aerodynamic". After all, what good is "comfort" and "power output" if the position is not "aerodynamically efficient"? I believe that the true goal of a "proper fit" SHOULD BE to not only maximize comfort and power output, but to maximze "aerodynamic efficiency" as well. In the next few months, I'll be developing a method to do just this- by calculating a riders Frontal Area (FA) and reducing it (thereby reducing air pressure drag), without compromising "power output" or "comfort". In the interim, check out this article which gives a good explanation of what I'm talking about: http://www.exploratorium.edu/cycling/aerodynamics1.html Stay tuned for more...
Posted by Rob Muller at 7:03 AM No comments: