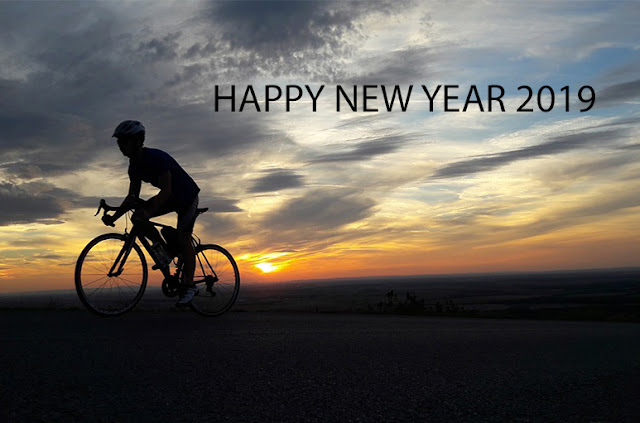 Another year of cycling in the record books.  2018 was a good year cycling for me..only because I dropped so much weight (down to 160 lbs from 195 lbs.)  It was fun dropping all the Fatty Patty's on group rides- especially in/on the hills.  On one ride in the spring, I dropped the group leader on a long 1 mile hill that averaged 9% grade.  He wasn't a happy camper.  I don't think anyone ever passed him on the hill before..haha

For me, 2019 will be more year-round recreational cycling including more fishing and golfing in the spring, summer and fall.  What I won't be doing for the first time in 10 years is USA Cycling Officiating.  I decided to take the year off in 2019 as I was burning out in 2018.  I was disappointed in 2018 because at least a half-dozen races I signed up to officiate were canceled.  I was also disappointed at one particular race director/organizer who obviously doesn't know the difference between safe and unsafe race conditions.  I'll spare the details so that I don't embarrass her.

Today I'm actually going on a group ride w/ the old farts.  It's a local 'C' ride that I ride my bike to/from. It will be a little chilly (in the 40s), but hopefully the sun will be out.  The people on this ride are in their 50s and 60s and ride year-round.  They may actually be in better shape than what I'm in right now because I stopped riding outdoors in October.  I've been riding on my indoor Computrainer using Zwift just to maintain some level of fitness.  Riding indoors isn't as good as riding outdoors, but it's better than nothing.  I'll continue to ride/train through the Winter both indoors and outdoors (weather permitting).

In the Spring/Summer of 2019, on my 60th birthday, I plan to ride from my home in Doylestown, PA to my Lake House on Lake Wallenpaupack in the Pocono Mtns.  It's a 100+ mile ride with over 3000 ft. of climbing.  My friend, and Cat 1 racer, Jason Wood may join me on the ride.  I've ridden many century rides in the past (100+ miles) but I never rode to the Poconos before.  And, I never rode at the (fast) pace that I'll probably be riding...especially with Jason.  I'm hoping to average 16 mph which includes hills and stops for water breaks and pee breaks.