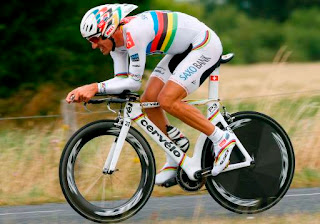 Specificity of Training..so what is it and why is it so important?  In a nutshell, the Specificity Principles says, "if you want to be good at something..you've got to do THAT thing".  Sounds pretty simple huh?  Well, it is..but yet I see a LOT of athletes using alternative methods of training to help them improve in their specific sport.  For example, I see Triathletes jumping in Criteriums or Road Races in hope of improving their Triathlon bike split.  More specific, I see Criterium racers entering Road Races thinking that Crits will improve their Road Racing performance..even though in a Crit you spend 90% of your time in the drops and a Road Race 90% of your time on the hoods.  It's a different position utilizing different muscles.  Well, maybe not different muscles but different parts of the muscle.  i.e. one position may be utilizing the Vastus Intermedius (the upper portion of the Quad) more while the other position may be utilizing the Vastus Medialis (the lower inside portion of the Quad).  I realize it may not be such a big deal/difference for a Crit versus a Road Race but there is quite a difference between a Road Bike in a road race and a Time Trial Bike in a time trial.  I don't have the data to support this statement..but I'll bet anyone that buys a TT bike for the first time will have a lower power output on the TT bike as compared to their road bike.  I'm not saying they won't be faster on the TT bike, I'm just saying their power output will be less.  Any takers? (for a beer).  Spend enough time training on the TT bike and it may go the other way- you'll produce more power on the TT bike in the TT position than the road bike position.

You'll notice I said you should be practicing under the SAME conditions.  That just doesn't refer to the "terrain" of the course but also the "power output demands" of the course.  If you know that your 3 mile road race loop has a 1/2 mile hill that's at a 10% grade...you SHOULD be prepared for it.  Perhaps a good indoor training workout for such a course would be an 8x3 @L5 3RI interval workout..simulating 5 loops of the race where you're at VO2max for 3 minutes while you're climbing the hill.  Better yet, if you have prior power meter data on each race (like I do)..you know that, for example, at the Mount Joy race you had better be able to maintain 300w for 2 minutes (as a minimum) while you're climbing the hill (for 5x)..otherwise you'll be dropped.

The closer you get to race day, the closer you should be trying to replicate the actual race conditions during training.  That is why for all the athletes I coach, interval workouts leading up to a particular race will closely mimic the demands of the race..including doing them outside on the road.  That is unless you recently started your Annual Training Plan.  I'm not going to give an athlete a series of VO2max interval workouts a month or two into their Annual Training Plan...even if they do have a race approaching.  I'm a proponent of building a good base as a foundation for the harder more intense workouts to come...for a LOT of reasons.  And, more importantly to get the athlete ready for their "A" race which isn't usually until the May-June timeframe.  Early races should be "training" races in my opinion.  It's awfully difficult to maintain a high level of intensity (required to podium during a race) throughout the entire race season.  It'll be interesting to see how the guys that are podiuming now are doing in June.  Unless they are new to racing, or should have upgraded, I'll bet they aren't doing as well.  BTW, I haven't lost a beer bet yet.
Posted by Rob Muller at 1:27 PM