For those that don't know me, or for those that haven't seen me in a while..I've lost 35 lbs. since last year this same time.  Last year, on Christmas Day, I weighed 195 lbs.  This year, I weigh 160 lbs.  That weight loss was due to me "getting back in shape". i.e. eating clean/healthy and exercising regularly by cycling 3-4x per week.  Although I don't look great (according to friends & family), I feel great.  Friends and family say I look sick and they're asking my wife if "I'm ok".  Yes, "I'm ok".  It's not like I haven't been here before.  When I was 50 yrs. old (I'm 58 now), I dropped from 220 lbs. to 195 lbs. then from 195 lbs. down to 175 lbs.  I stayed at 175 lbs. for 5-6 yrs. until I let it slip back up to 195 lbs. last year.  The reason?  For those years that I let my weight gain from 175 to 195 were the years I stopped riding my bike.  Not sure why I stopped..well I do somewhat.  I used to race my bike when I weighed 175 lbs. and then I crashed at a big race (that I trained over a year for) and wasn't able to finish.  I thought to myself, why am I doing this..training so hard and eating so clean only to crash in a race I prepared so hard for...for who..for what?  So, I gave up riding and racing altogether (and ate/drank whatever I wanted) which was pretty stupid because I lost all my fitness I worked so hard to obtain.  I just didn't care anymore.  I don't expect to race again anytime soon (although I did hear that USA Cycling may open up a 60+ Masters Category that has me thinking about it), I do expect to ride recreationaly in the future- this time for good.  I always want to continue to ride my bike- God willing.  There's just something about it..the free/liberating feeling of riding.  I still remember my first bike, at Christmas, almost 50 yrs. ago today.  It wasn't much of a bike.  It was a single speed stingray design from Sears second hand store called Cozi's. It had a banana seat, sissy bar, high handlebars, etc.  It wasn't even close to being as nice as my friends 5 speed Schwinn Orange Crush but it was mine.  When I rode it, I got that free liberating feeling.  I get the same feeling these days when I ride..whether it's my bicycle or my motorcycle.  Later, when I was 13, I received my first Schwinn 3 speed Varsity road bike on Christmas.  I was so proud of that bike.  I rode it every day even throughout the Winter.  So, for me, riding a bike has been a part of my life since I was 8.  Tricycles don't count- ha.

"In 1998, the U.S. National Institutes of Health and the Centers for Disease Control and Prevention brought U.S. definitions in line with World Health Organization guidelines, lowering the normal/overweight cut-off from BMI 27.8 to BMI 25. This had the effect of redefining approximately 29 million Americans, previously healthy, to overweight.[20]

So, if you're BMI is over 25 you're overweight, over 29 obese.  Did you know that over 35% of Americans are "obese"?  Fat America for sure.  That's why when people look at my svelte physique they ask, "Is Rob ok?  Is Rob sick?".  No, he's not sick, you're just so used to looking at fat/overweight/obese people which seems to be the norm these days.  Here's the BMI chart with recommended guidelines: 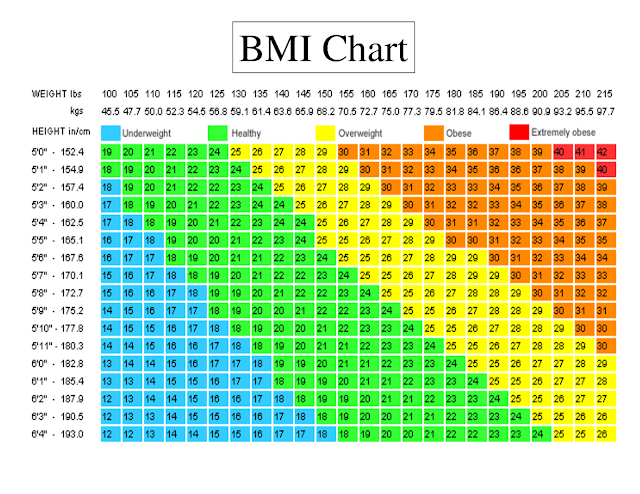 For me, since I'm 5'11" and I weigh 160 lbs, my BMI (according to the chart) is 22.  That is near the middle of the green band.  Actually, it's closer to the overweight band (yellow) than the underweight (blue) band.  So, according to the National Institute of Health (and CDC), I'm where I should be- in the healthy range.  Are you?