I made a post a year or two ago on rolling resistance and how different mountain bike tires have different coefficients of friction based on tread pattern.  But, what I didn't mention is how tire pressure affects rolling resistance (generally the higher the pressure the lower the coefficient of friction between the tire and the road due to less tire contact with the road) not to mention the road surface. i.e. how rough it is.

After analyzing one of my post rides the other day, I was wondering why I was putting out more watts (power) on my mountain bike but my average speeds haven't been increasing.  That's because it's been very wet/cold recently and the ground has softened up on the tow path upon which I ride.  The tow path is comprised of dirt, gravel, leaves (lot of them lately), chunk rock, etc.  When it gets wet, the dirt turns to mud and the gravel mixes in with the mud and the leaves.  Thus, a softer surface to ride on.  I'm not sure what the difference is in watts between a soft tow path surface and a hard surface but I'll guess and say it's close to 10% or 20 watts at 200+ watt output.  Here's a table (below) with road surface coefficient of frictions and you can see that concrete has twice as less friction than asphalt does.  And, a rough paved road (I'm assuming something like chip seal) has 4x the friction that a smooth concrete road has.  So, you can imagine what the difference is between hard dirt and soft mud. 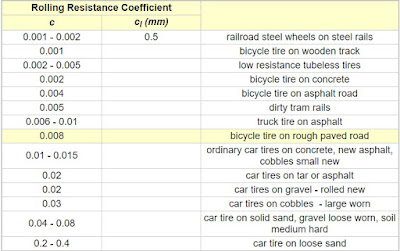 So, what does all this mean?  A higher coefficient of friction between the tire surface and the road surface means less speed for a given power output.  How much depends on a lot of things: road surface, bike tire rubber composition, bike tire width, bike tire tread pattern, bike tire sidewall stiffness, tire pressure, road surface temperature, etc.