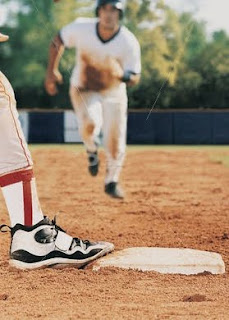 It's December..whoo hoo! Only 25 more days until Santa brings that new bike, wheelset, power meter, computrainer, etc. I can't believe the regular college football season is over though..I'm bummed. It seems like only yesterday I was basking in the sun in Beaver Stadium watching the Nits beat-up on the Zips. Regardless, I hope most of you have been X-training like I have. I've really enjoyed riding my mountain bike this Fall so much lately I can't even tell you the last time I was on my road bike. About now, all of you should be thinking about starting your Annual Training Plan (ATP) if you haven't started already. And, whether you're planning on sticking to the traditional training plan that consists of a distinct Prep, Base, Build, Pre-Race/Peak, and Race Phase (ala Joe Friel) or you're considering one of the newer High Intensity Training Plans (ala Carmichael) you still need to establish a Base. Ok, let me say that again..before you start your ATP, or as part of your initial ATP, YOU NEED TO ESTABLISH A BASE.

What is a "Base"? I'm sure you hear it quite often, during a group ride, this time of year, i.e. "I'm just taking it easy today..building a base" or you hear, "What the hell is that guy doing pushing it so hard this time of year...he should be building a base?" No, it's not a baseball base like the pic above. A base is exactly what Mr. Webster says it is, "the bottom or foundation of something". In regards to an Annual Training Plan (ATP) the definition is no different- it's the foundation; the foundation of fitness that you'll build "other stuff" to later on. (BTW, that "other stuff" is the higher intensity stuff- down the road).

So, what are the physiological adaptations or benefits of Base Training? And why so important? Here are some reasons:
a. Muscles and connective tissues are strengthened, enabling them to handle increased volume and intensity later on. (Remember the "other stuff")
b. Your body learns to burn fat and spare glycogen, enabling it to go longer/further.
c. Your body learns the neuromuscular coordination required to perform smooth, efficient movements. Exercise performance becomes more economical and fluid.
d. Your blood volume goes up, increasing the ability to deliver oxygen to working muscles.
e. Your heart becomes able to pump a higher volume of blood with each beat, increasing this ability even more.
f. Your muscles build more capillaries to deliver more oxygen to working muscles.

How do I effectively build a base and what intensity should I be riding? I believe the best way to effectively BASE train is by riding long at aerobic intensities. How long? Well that depends. If you're a Crit racer or Sprint Distance Triathlete that's a couple hours. If you're an IM Triathlete or road racer that could be 3-5 hrs. What intensity? I said "aerobic" intensity which means the L2 and L3 levels/zones. Yes, I know you can ride "aerobically" at L4 (Threshold) but this is NOT the time of year to be riding long at L4. Keep in mind that your Zones/Levels this time of year are also NOT going to be the same as they were during the summer/peak season. So, if you're not sure what your levels are- test yourself and re-establish new zones. In addition to riding long (yes I know the weather outside is getting colder and the days shorter) this is the BEST time to be working on: Isolated Leg Drills, Form Sprints, Spin-ups, and high cadence drills. (see prior blog)

In addition to riding long and honing your pedalling skills this is also a good time of year to get back into the gym to start strengthening your core muscles and doing a little resistance training. (check out my archives for weight training for cyclists) Just yesterday I saw a Tweet from Lance Armstrong where he said he just finished up a Yoga session. Wow, Lance Armstrong doing Yoga. I guess if it's good for Lance it should be good for us. Well, I think it is. I'm not a Yoga fan but I do like Pilates. My ailing back (2 herniated discs) appreciates it too. This is all part of establishing a Base...strengthening your muscles and preparing your body for the more intense stuff to come.

So, let that hotshot go off the front of the group ride and push it hard. You now know that he/she is NOT establishing a proper base and is probably going to end up injured or burned out in February when the real intense workouts start. So go ahead and say, "What the hell is that guy doing pushing it so hard this time of year...he should be building a base?". That's what I'd say!

Yoga is a way of life, a conscious act, not a set or series of learning principles. The dexterity, grace, and poise you cultivate, as a matter of course, is the natural outcome of regular practice. You require no major effort. In fact trying hard will turn your practices into a humdrum, painful, even injurious routine and will eventually slow down your progress. Subsequently, and interestingly, the therapeutic effect of Yoga is the direct result of involving the mind totally in inspiring (breathing) the body to awaken. Yoga is probably the only form of physical activity that massages each and every one of the body’s glands and organs. This includes the prostate, a gland that seldom, if ever, gets externally stimulated in one’s whole life.
www.coomararunodaya.com