Is dairy bad for you? 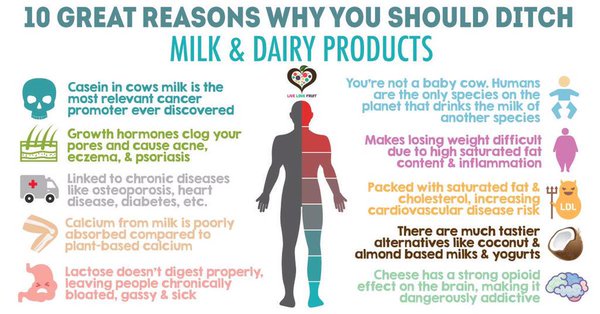 I can't say I'm a real dairy person.  Other than the milk I used to put on my cereal each morning, and the occasional ice cream after dinner, I was pretty much void of milk or dairy products.  Yes, I ate eggs occasionally on the weekend, maybe even had an egg salad sandwich for lunch during the week.  And, I had to have cheese on a sandwich or hamburger- who doesn't?  But, for the most part, I was void of dairy products.   That is until I was diagnosed with Rosacea (a chronic skin disease) a couple years ago.  Dairy products are known to stimulate the release of insulin and IGF-1 (Insulin-like Growth Factor) which contribute to acne, eczema & psoriasis and certain types of cancer like prostate cancer.  So, I cut dairy completely out of my diet and I feel (and look) a lot better.

Here are some interesting facts about milk and dairy products:

- About 75% of the world's population is unable to break down lactose as adults, a phenomenon called lactose intolerance.

- Healthy fats and fat-soluble vitamins are not present in low-fat or skim dairy products, which are often loaded with sugar to make up for the lack of flavor caused by removing the fat.

- The great majority of evidence shows that dairy improves bone density, reduces osteoporosis and lowers the risk of fractures in the elderly (easily replaced by a calcium and vitamin supplement).

- Despite being high in calories, consumption of full-fat dairy is actually linked to a reduced risk of obesity.  But, who consumes full-fat dairy these days? Hardly anyone.  That's why low-fat and non-fat milk are the high sellers.

- Low-fat dairy (which is often loaded with sugar) seems to be a bad choice overall... the main metabolic benefits of dairy are due to the fatty components.

So, what are the dairy alternatives?  As far as cheese is concerned there isn't an alternative.  At least I don't know of any "tasty" alternative.  If there is, let me know.  It's just easier for me NOT to ask or put cheese on anything.  As far as milk goes, I use Almond Coconut milk in my cereal and coffee.  Does it taste as good as milk or creamer?  Nope, I'm not going to lie to you.  But, it's not that bad.  Egg alternative?  I don't know of any.  I'm not worried about it though, I wouldn't say I eat more than 2 eggs per week. If you're concerned about not getting enough Calcium or Vitamin D (or other vitamins) by cutting out dairy, then use a supplement.  Like eggs, same with ice cream.  I have a kids size ice cream cone maybe once a month at Rita's or DQ- that's it.  We never have ice cream (or ice cream treats) at home in the freezer like we used to.  Outta sight outta mind.