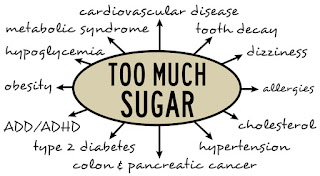 In addition to too much Sodium, My Fitness Pal (see past blogs) revealed that like my Sodium intake my Sugar intake is much too high.  They say the recommended daily intake of sugar should not exceed 36g and my intake is close to 60g.  And, I'm NOT a sweets person at all.  In fact, other than my morning cereal and an occasional/ rare cookie, ice cream, piece of pie, etc. during the Holidays or on a special occasion, I'm void of all sugar.  I won't even touch a donut or cookie when somebody brings them in to work.  Candy?  I can't tell you the last time I bought a candy bar..maybe 20 yrs. ago.  I won't even steal one out of the Halloween candy dish sitting on the dining room table for the past week.  And, I walk by that candy dish at least 2-3x per day.  And, that's not to say I don't like candy.  I could easily eat and enjoy the Reese's Peanut Butter Cups in that dish- every one of them! ha

Is Sugar really that bad for you?  What do you think?  Just look at the illustration above.

So, where is all my sugar coming from?  Well, the cereal is an obvious one.  I eat General Mills Honey Nut Cheerios in the morning which I believe has 9 grams of sugar per serving.  That's too high.  That's why I'm in the process of replacing it with Kashi's Heart to Heart Oat Organic Honey Toasted Cereal.  Kashi has 1/2 the amount of sugar (4g) and twice the protein than General Mills Honey Nut Cheerios.  Where else is my sugar coming from?  Breads, Tomato Sauce, Protein Bars, Salad Dressing, BBQ sauce, Ketchup, Gatorade, Peanut Butter, etc.  Who would have thought sugar in bread and soup?  Yup.  Which is why it's better to buy a low sugar & sodium bread make your own soup. And, Ketchup is loaded with high fructose corn syrup (yes, fructose is a sugar).  So, think about that when you eat your next hamburger and fries.  (Yes, even I eat the occasional hamburger with fries.  You gotta live.) The popular sports drink Gatorade?  Yes, loaded with high fructose corn syrup.  What's the alternative?  Water down the Gatorade. A friend of mine that's an MD and sports physiologist said watered-down Gatorade actually better for you than Gatorade or Water alone. Peanut Butter, really?  That's why I've switched to low-sodium low-sugar natural Peanut Butter.  I can't tell the difference between the low sugar/low sodium and regular peanut butter so choose the former.