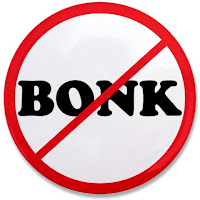 If you've been following my coaches blog you'll have noticed that a couple blogs ago I posted a blog on "bonking".  As endurance athletes, I'm sure one time or another we've experienced "hitting the wall" or "bonking".  The leading cause of "bonking" is not being fueled properly (glycogen depletion) either BEFORE the endurance event or DURING the endurance event- or worse BOTH!

In addition to being properly fueled, I was wondering what else I could do (other than being properly hydrated and carb-loaded) to help prevent "bonking".  How about "bonk training"?  I actually used it (successfully) as part of a fat-loss program this past Winter.  What is "bonk training"?  According to Wikipedia- "Bonk training is an exercise program designed for weight loss. It suggests the following strategy on an empty stomach the first thing in the morning, when glycogen store levels are low: consume coffee or caffeine equivalent to 2 or 3 cups of coffee, run or cycle at a casual pace (60% of max heart rate) for 20–90 minutes, have a normal breakfast right after exercising. Proponents claim this will force the body to "bonk" shortly into the exercise, and subsequently burn more fat to generate the energy."

So, not only will "bonk training" burn more fat..it will train your body to burn fat reserves for energy BEFORE the more valuable carb reserves.  So, in essence, you're "topping off" the fuel reserves by burning fat (initially) instead of carbs.

I've started "bonk training" recently for several reasons:
a. it's starting to get hot out (100F on store for today), so I'm getting up at 0600 and riding for an hour (15 min. warmup, 45 min. ride) while it's still cool.  I hate riding when it's hot/humid cause I sweat like a pig...which obscures my vision, corrodes my bike, etc.
b. I could stand to lose the 3-5 lbs. that I gained while I was vacationing in Italy (too much pasta and wine)
c. it will help stave off "the bonk" for future endurance rides..by burning fat (instead of carbs) on my HARDER and LONGER endurance rides

If you're going to start bonk-training, like me, the important thing to remember is NOT to eat anything prior to the morning ride.  Also, only drink water..no Gatorade or drink with carbs in it.  Coffee is ok, but drink it black..no cream or sugar.  Personally, I don't think the caffeine is required.  The other important thing to remember is NOT to ride too hard.  You only want to be riding at Tempo pace.  Do NOT ride at Threshold pace or higher.  And, the ride duration should be no longer than 30-60 minutes.  I like riding at a high Tempo pace right up to my Threshold for 45 minutes.  When you're finished riding, have a nice bowl of cereal and a latte.  That's what I had this morning.  The calories you burned during your ride will wipe out the calories you consume for breakfast- and more.  So, you start your day well fueled with a caloric deficit.

Don't worry about any health risk with this type of training. I actually got into an argument with a Fitness Director on a Cruise Ship ( a year or so ago) because he insisted that this type of training would burn muscle instead of fat.  I don't know where this kid got his Physiologist's Degree..but if you're only going at Tempo pace for 30-60 minutes you're NOT going to be canibalizing muscle mass. i.e. burning protein.  The key to "bonk training" is NOT to go too hard or too long in the morning.  Keep it at Tempo pace for 30-60 minutes and you'll be fine.  It's worked for me over the Winter..can't think why it wouldn't work for me over the Summer.