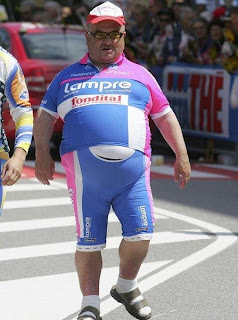 Sorry, but I just love this picture.  I'd just like to know what bike would support all of that- FAT!

It didn't take me long.  Not even one month has passed from the end of the 2010 racing season and I've already put on 5 pounds.  I saw a friend before one of my Mtn. bike rides today and he said, "hey, are you wearing pads?"  I didn't know what the heck he was talking about.  (When I first started Mtn. biking I did wear a hip pad because I had fallen on my hip and bruised it pretty good, so the question didn't seem that odd.)  I said, "No, I'm not doing any technical Mtn bike riding today".  Then, after I started riding I looked down at the leg warmers I was wearing and I could see why he asked.  The leg warmers were choking my fat thighs and making it look like a constricted sausage..bleh.

For me, it's not a laughing matter (well, it is but I don't laugh) because it's hard as hell for me to take off those pounds....especially since it's getting colder outside, less light to ride, holidays right around the corner, etc.  And, the only way I'm going to be competitive for the 2011 racing season is if I lose weight.  For me, it's NOT an option to lose weight- it's mandatory.

So, I put on a few pounds and I'm getting heavier/fatter.  Now, what do I do to shed it?  Well, I've been in this boat before..except I weighed a helluva lot more.  I'll tell you some proven methods for losing weight over the years.  Here they are:

1.  I travel more than anyone I know.  In fact, I'm on the road (living out of my suitcase) at least 3 weeks out of the month...every month of the year.  It's tougher on the road because all kinds of food just seems to end up under your nose.  Every hotel I stay in has cookies at the front counter- FORGET ABOUT EM.  Don't even look at them.  This is coming from a guy that LOVES cookies.
2. When on travel, find a gym and workout daily.  Most of the hotels I stay at have deals with the local gyms.  Take advantage of the FREE gym passes.
3. When travelling by car DO NOT stop at fast food restaurants.  The stuff is crap.  If you have to stop, stop at a Wawa and get a sandwich.  If you don't have time and have to stop at a fast food restaurant..choose them wisely.  I'll stop at a Chic Fil A from time to time.
4. At business meetings, bring your own snack because you can count on donuts, pastries, bagels and just about every other 400+ calorie snack being on-hand.  The meetings I attend have nothing but junk food and candy.
5. If you have to park at an office building, park the farthest away you can from the front door and once inside..NEVER use the elevator.  Always use the stairs..even if it's 3-4 stories high.
6.  When you eat meals..eat more frequent smaller meals rather than stuffing yourself at one sitting.  I'm often guilty of this.  I miss breakfast and eat a HUGE lunch and then snack on junk (or beers) for dinner.
7.  Knock-off the booze.   If you have to drink beer while you're out at dinner..no more than 2 (300 calories max).
8.  Keep a daily journal of EVERYTHING you put in your mouth.  Count the calories in.  It's a pain in the a$$ keeping a journal..so the less you put in your mouth..the less you have to record.  Trust me..it works.
9.  Make a goal and stick to it.  Use a contest, a cycling event, whatever... for a goal and something to shoot for.  I lost 40 lbs. in 2003 from a best body contest.  I didn't win..but I met my goal.
10. If you can squeeze two workouts in a day- DO IT!  Keep your body metabolism high.
11.  Knock-off the dairy.  Lately I've been drinking too much half-n-half in my coffee, too much cheese in my sandwiches and dinner plates, and too much ice cream.  Knock it off..or as a minimum reduce it.
12.  Knock-off the carbs.  This is one time of the year when you (the cyclist) really don't need carbs in your diet...so put that roll down doughboy.
13.  Drink water.  I'm not a soda person but I am a Gatorade fan.  Gatorade is loaded with High Fructose Corn Syrup- a chemical that is not processed very well in your body...especially when you're not working out.  You just don't need the extra carbs when you're not working out so dump the Gatorade in the off-season.
14.  If you go out with the family to eat at a local restaurant, only eat half your dinner and get a "to-go" bag/box for the other half.  For me, leftovers sometimes taste better a day later.  Plus, the important thing is, you're only eating half the calories in one sitting.  Lets face it, most restaurants put too damn much on the plate.  They sell you on "quantity" NOT "quality".  Well, they don't sell me..but they sell 95% of the population.
15. Find a friend/athlete in the same boat as you.  Keeping your weight off doesn't have to be a solo project.  Find someone at work that likes to workout and meet them at the gym.  It's a lot harder to blow off a workout when a friend is meeting you at the gym or coming over your house.  That's what makes Weight Watchers so successful for some people.  It's not about the magic (gross) food they eat that works..it's the support group that works.
16.  Walk as much as you can and walk fast wherever you go.  Walk the dog, walk to the store, walk to work, take a hike on the weekends.  Just walk!
17.  Weigh yourself daily.  It's a good motivator to keep your weight down.  You'll actually look forward to it after a while- rather than dreading it.
18.  Include weight training when exercising.  Throw in some resistance/weight training with your riding.  Unlike cardio training, weight training continues to burn calories AFTER the workout.  Plus, weight training will help ward-off osteoporosis.
19.  Get lots of rest.  Contrary to what most think, when you rest your body burns calories- while it's repairing those tired muscles.
20.  Keep riding.  Ride often and have fun.