Pacing on a Hill Climb 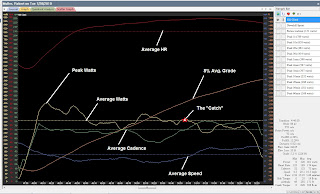 For the most part, when I train, I ride solo.  But, occasionally I like to get out and ride in/with a group.  After all, cycling isn't all training/racing..it's social too.  At least I think it is.  Unlike most cyclists however, I don't ride in a group to measure my performance.  And, don't kid yourself if you say you NEVER do that.  I think we ALL do that from time-to-time.  The reason I said, "unlike most cyclists" is because I train/race with a Power Meter.  If I want to measure my performance on a training ride..I just download my file and analyze it.

What I wanted to share with you in this blog is a lesson learned on my group ride this morning.  About 1/2 hour into the ride, we began to ascend a mile long hill climb that averages approximately 8% grade.  Two guys in my group hit the hill hard and blew by me.  My normal reaction was to chase, but I also knew the hill was approximately 1 mile long.  So, I let them go.  You can see that my power at the start of the climb was over 400w.  That is definitely L5/L6 watts for me..so I backed it down to 320w which I knew is my L4/L5 watts range.  My Heart Rate was averaging L4/L5 bpm too..so I know it's right where I wanted to be.  Sure enough, the guys that blew by me at the start were slowly being reeled in.  In a little over 1/2 the climb the catch was made and I actually blew by the same two guys that blew by me at the start.  What these guys got was a lesson in "Pacing a Hill Climb" with a Power Meter.

So, there you go, the benefits of Training with a Power Meter.  Power ON!  Coach Rob
Posted by Rob Muller at 8:45 AM