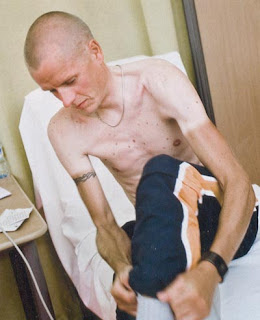 I was going to include this photo in my last blog but figured I'd keep it to a blog of its own. Just as much as the last blog's photo was funny..this one isn't. As much as we'd all like to lose weight and be "lean & mean"..we don't want to go this far. Does anyone know who this man (in the photo) is? I believe it's Michael Rasmussen the Danish Professional Bike Rider that ALMOST won the 2007 Tour de France. Notice I said "ALMOST". Why almost? Because Michael lied about his whereabouts to avoid taking a blood test, and eventually dropped out of the 2007 TDF (before he was thrown out) just after he had won Stage 16- and leading the race. Why quit when you're leading a race? Because Michael was blood-doping and he knew he'd get caught- thus he dropped out. Why did he have to blood dope? Because when you weigh a buck twenty, like it looks in this photo, how on earth can your body endure the rigors of the TDF without an extra boost? There is just no way your body is going to perform at that level/intensity for that duration, during the TDF without some OUTSIDE assistance...ala blood-doping and God only knows what other drug he may have been taking.

So, in addition to not ending up looking like the fat man (previous blog) for obvious reasons, we don't want to look like Michael either. At least I don't. If I didn't know this was Michael (in the photo) I'd say this photo would be a good poster child pic for the Bilimia and/or Anorexia Nervosa Foundation. I'm sure Michael's fear of gaining weight, which would ultimately slow him down on the steep hill climbs, led to what looks like an eating disorder. Hey, maybe Michael NEVER had an eating disorder and he looked like this (photo) his entire life. Perhaps. Remember, if you want to be a better climber it's all about Power to Weight Ratio. You either increase Power, lower your Weight or do both. In Michael's case, it looks like he opted to lower his Weight. Obviously, it worked for him..up until the point (Stage 16 of the TDF) he needed to blood-dope to maintain his standing...and later withdrew.

Anyway, after looking at both the fat-man pic (previous blog) and skinny-man Mike pic, I think we'd all like to be somewhere in the middle. Personally, I'd like to be on the skinny side because it's a helluva lot easier to gain weight than it is to lose it. At least it is for me. But, that could be an ignorant statement since I never suffered from Bilimia or Anorexia Nervosa. There is an optimum cycling weight for all of us..and I hate to say it..but my experience is, if you want to be competitive you better be on the lean side..or you just aren't going to be able to hang in the hills. Just be careful you don't get too lean..or you'll end up looking like Michael...or worse, needing an extra (illegal) lift to compete. I know we're ONLY amateurs but I wouldn't doubt that some competitive amateur cyclists/triathletes are blood-doping during longer endurance events, using EPO, or whatever the drug of choice is these days. It's sad, but probably true.

If you do look like the fat or skinny man, please get help. Just like obesity, Bilimia and/or Anorexia Nervosa are serious diseases that kill. I saw a woman in my gym this morning, on the elliptical trainer, that was skinnier than Mike. I felt like saying something to her...like "as long as you find the need to workout, when you ONLY weigh 90 lbs, please eat something". MY wife was there too..she saw..and she agreed that the woman was too thin. Perhaps the next time I see her at the gym (and I have for the last 2 weeks), I'll enquire at the front-desk about her. Maybe it's not as bad as it looks.

Power ON! Coach Rob
Posted by Rob Muller at 2:29 PM