Simulate the Race...BEFORE your Race! 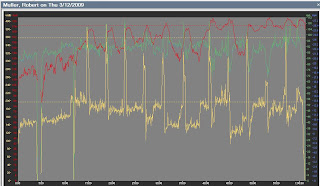 For every workout I prescribe (to the athletes I coach)..there is an underlying reason for each one. Some of my favorite workouts, such as: 2x20s @L4, and 3x5s @L5 are prescribed because, not only are they based on physiological adaptations- improving Lactate Threshold and VO2max, they work. i.e. there is scientific data that exists that supports the assertion. Even so, there will ALWAYS be someone (PhD geek) that refutes such findings/assertions.

However, what NOBODY can argue (even the PhD geeks) is the efficacy of workouts that simulate ACTUAL race day conditions. Let me give you an example. I entered a Cat 4/5 race last year that had a 6 mile loop/lap. In that route/race, there was one particular hill that was approximately a 10% grade that seemed to drop a lot of people from the group..even after only one lap. I was dropped after the 3rd of 4 laps. When I got home, I analyzed the Power Meter data and was surprised to see (for better or worse) that I averaged 330 watts for 1 minute on each hill ascent...and averaged 220 watts the rest of the way/lap. Obviously, those 3x1's @L6 were enough to blow me up (aka burning matches)...losing contact with the front of the pack.

Therefore, in better preparing for the same race (or a similar race) this year..I performed a workout last night that will help me get in shape. The workout was a little different: instead of four 6-mile laps I simulated a race that is twelve 2-mile laps. And, instead of 1-minute hill climb per lap, I simulated a 30 sec hill climb per lap. (The WKO+ file is attached.) This was a very difficult workout that left me gassed at the end. But, at least now I know what I can and can't do when a similar race comes around this year. And, I'll be in better shape to tackle it because my body is adapting to the workout/simulated race earlier.

So, before your races this year..take a look at your Power Meter data from last year's races and see what the Power requirements were for that particular race. Chances are, those same requirements will be identical this year. Simulate those same race conditons at home on your trainer, or out on the road, and you'll be better prepared this year. And, who knows..maybe this year you'll be able to hang with the BIG DAWGS (instead of being dropped like I was last year).
Posted by Rob Muller at 12:11 PM