The Race of Truth 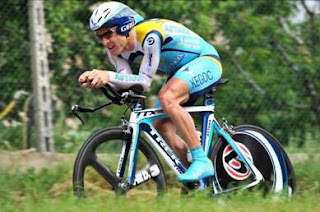 I know a lot of guys/gals that race Criteriums, Road Races, and Track/Mtn Bike/Cross Races but I don't know too many people that compete in Time Trials (aka the "Race of Truth"). Wonder why? Could it be the physical and mental demands of the event? Absolutely! Does it require a Time Trial/Tri bike? No, not really. You can always buy clip-on aero bars and put them on your road bike. Is it because they're NOT really much fun/glamorous/exciting? Could be, I don't know.

BTW, time trials are called the "Race of Truth" because each rider is racing against the clock. There is no teamwork, no drafting, no race tactics, no place to hide etc..just you against the elements and the clock.

Regardless of the reasons why Time Trialing is not as popular as other races amongst local cyclists (at least I don't think they are), I'd like to share some advice on pacing for time trialing after reading a reccent article by Dr. Allen Lim, Saris/Cycleops advisor and Garmin/Chipotle's team Doc. Pacing correctly is essential for a fast time trial. Dr. Lim advises the following for correctly pacing in a time trial:

"Pacing in TT's is highly dependent on terrain profile. The idea is that you want to go harder, produce more power output on the sections of the course where you go slower. You want to ease off, allow your body to recover on sections of the course where you're going faster. For example, if you're going downhill at 55kph, and you try to produce 30 or 40 more watts, you wouldn't go much faster because aerodynamic resistance is exponential, and power relative to speed is cubic, so that much more power maybe gets you incrementally smaller amounts of speed. Likewise, if you stop pedaling and you get in an aerodynamic tuck, you're probably going faster than someone who's producing 300-350 watts on a fast descent. In contrast, if you're going up a hill where aerodynamic position doesn't matter as much, 20 or 30 watts more, the amount of time you put on your competitors is immense. So what we try to teach the guys is the ability to go deep in the red on the climbs, just enough so they maintain momentum, and then they can recover on the downhill or fast sections. "

So, keep that in mind next time you do a Time Trial...or if you're thinking about doing one for the first time. BTW, there are a bunch of 36km Time Trials coming up in the PA/NJ area (on Rt. 29 in NJ) starting on Sunday March 29 and continuing throughout the summer (at least one per month). I'll be there..come join me!
Posted by Rob Muller at 8:55 AM