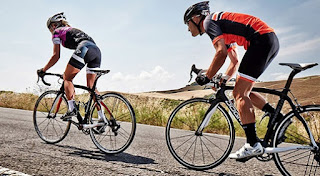 I decided to go on a group ride this a.m.  The ride was scheduled for 0830.  I show up at 0815 anticipating 20 or so riders.  There was only 1. One?  I thought maybe he and I were in the wrong location or that they canceled the ride and we didn't get the memo.  He said, "nope we're in the right spot".  The weather was fine.  I asked, "where is the ride leader?"  He said, "dunno".  Well, we waited 25 minutes and the ride leader never showed.  Believe that?  Heck, if I were the ride leader and I couldn't make the ride, I'd at least have the courtesy of driving my car to the meeting location to tell everyone I can't make it and then head back home.

Well, the good thing is/was this guy was a local so he knew the back roads and he was more of a B rider than a C rider.  We had a great ride that was exactly 30 miles long and lasted a little over 2 hrs- even with a stop at a local coffee shop.   I stopped in the coffee shop to get a protein bar.  I usually carry a protein bar with me but the cupboard was empty.  I got a banana flavored organic protein bar made from a company called gomacro.  It was really good.  So good, my next blog will be about the protein bar.

Our ride included what I thought were some of the best of Bucks County PA's back roads- really beautiful roads with little to no traffic.  We even rode a dirt/gravel road that was a couple miles long.  I'd say the route had a fair amount of hills..nothing to steep.  We climbed close to 2000 ft. which isn't too shabby in 30 miles.

I was actually glad the group leader didn't show up.  He or she would have most likely slowed us up and we probably wouldn't have ridden such beautiful roads nor climbed as many hills.  My kind of group ride. ha.