The beauty of a Power Meter for your bike 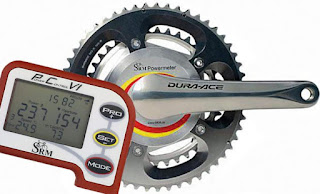 Getting back into shape is NOT fun!  It's demoralizing and embarrassing and it plain sucks (it hurts).  I can arguably say that at age 50 I was in the best shape of my life. At six feet tall, I weighed 170 lbs., my resting HR was about 50bpm and my Functional Threshold Power (FTP) on the bike was around 275 watts.  Thus, my power to weight ratio was 3.5 w/kg.  That's in the Cat 3/4 racing power range. Nothing to really write home about, but respectable nonetheless.  Six years later, at age 56, I'm probably in the worst shape of my life.  I weigh close to 200 lbs, my resting HR is about 68bpm and my Functional Threshold Power (FTP) on the bike is about ? watts.  I'm afraid to do an FTP test for fear of dying of embarrassment..or of a heart attack..whichever comes first.  (I'd be lucky if my FTP was 200 watts)  But, just like a scale tells you how much you weigh, the power meter tells you how strong you are.  Without a power meter you would have no way of knowing how strong you are.  You probably think you haven't lost that much strength.  I'll bet you lost more than you think.

So, if you want to know how strong you are on a bike..and how you compare to others..the only true way of knowing is to measure your strength with a Power Meter.  There are all kinds of Power Meters on the market right now..some built into the wheel hubs, some built into the crank arm, etc.  The important thing is to buy one that is accurate.  Yes, the more accurate they are the more expensive they are.  But, that doesn't mean you have to buy the top of the line SRM Power Meter for $4000.  There are less expensive models such as Power Tap Hubs that are just as good- in my opinion.  That's what I use.

I'm guessing the reason why most don't buy/use Power Meters (other than the cost) is that they truly don't want to know what their FTP is.  Kind of analagous to why most people don't jump on a bathroom scale..they just don't want to know.

Cycle-Smart coaching NZ is ready to meet the unique needs of the clients. At each, cycling fitness coaching our clients receives a personalized training that is custom made to achieve the personal goals. In addition to that we provide smart coaching training plan that share the expertise with the each individual or group.