Tis the Season to be Jolly...NOT Fat! 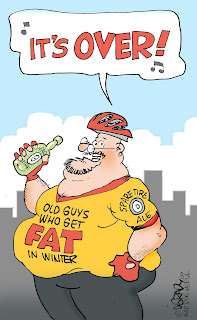 For those of you that haven't gained weight in the off-season, you're either under the age of 40, you don't drink beer, or you're exercising as much now as you were during the race season.  If you're one of these people, consider yourself lucky.  Lucky that you're young and your body's metabolism is high, lucky that you can drink as much beer (and/or eat) as you want, and lucky that you have the time to exercise as much as you did this Summer.

For me, I'm not one of the lucky ones.  When I eat/drink it seems to go right to my gut and butt.  I don't have time to do anything these days..especially during the week.  And, usually by the end of a long work day, the last thing I'm thinking about is getting on a bike and doing an interval workout on a trainer.  I'd love to ride outside except it's too dark, cold..and like I said..I'm beat!  I got on the scale yesterday and couldn't believe me eyes; I weighed almost 20 lbs. more than I did last April.  I thought perhaps the scale was a bit off (people do that- we try to blame our weaknesses on somebody or something) but when I tried on my size 32" waist jeans this a.m. I could barely snap them..let alone get them over my fat ass.  Yes, I'm FAT!

It's moments like these, however, that are a WAKE-UP call for me.  It's time to stop making excuses and start getting my butt (fat) in gear.  After all, it's only going to get worse (temptations) in the weeks ahead.  All those Christmas/New Years dinners, desserts, junk food, etc.  It's time to start exercising more and stop eating/drinking JUNK!

If you do a Search on my Coaches Blog you'll see that I've written quite a few blogs on Weight Gain/Fat/etc.  That's because it's just as important as developing power on the bike.  After all, it's your Power-to-Weight ratio (w/kg) that seperates the men from the boys in cycling..especially if your a roadie who races on hilly courses.  Even if you don't race on the road, it's just as important off-road on a Mountain Bike or a Cross Bike.   You want to increase your power and drop your weight to maximize your w/kg ratio.

Stop making excuses why you can't exercise.  If it's cold out, buy decent clothes.  If it's dark out, buy a decent light for your bike.  If you don't like riding on the roads at night, ride off-road.  If you don't like training indoors on a trainer, make it so you do like it.  Buy a nice Audio/Video system.  Buy a Computrainer and a couple Erg Videos.  Yeah, I know, these things cost $$.  Well, so does entry fees in bike races. Do you want to piss that $$ away?  That's what your doing if you don't train properly in the off-season and keep your weight down.  If you travel as much as I do, find a local gym that has spin classes.  Or, take your bike and trainer with you and ride in your hotel room.

Also, stop eating junk food.  Give up the desserts or if you have to- split them with somebody.  And, limit your holiday drinking to one or two glasses of wine/beer a day..that's it.  No reason to get all slopped-up drunk over the Holidays.  Plus, don't even think about drinking and driving.  You're stupid if you do..just too much at risk.

Again, tis the Season to be Jolly...NOT Fat!  NOW is the time to start shedding those pounds.  Don't wait for the New Year.  Do it NOW!

Power ON! Coach Rob
Posted by Rob Muller at 8:24 AM