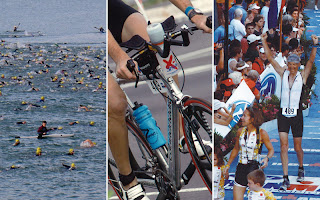 In addition to coaching road cyclists, I coach Triathletes as well.  In fact, I'm preparing/packing for my Memorial Day Weekend Training Camp in Lake Placid, NY..the home of Ironman Lake Placid (IMLP)..one of the most popular Ironman events in the country.  For those of you that have never been to Lake Placid before, you're missing out on one of the nicest (most picturesque) cycling training venues.  If you want "hill climbing" training..this is the place.  If the Ironman bike route is NOT enough climbing for you, you can try the Whiteface Mtn access road climb..the Alpe d'Huez of Northeast USA sporting an average 8% grade climb for 8 miles.  The Training Camp is run/hosted by Todd Wiley of TWiley Sports (http://www.twileysports.com/).  I believe this is Todd's 4th season he's been running camp.  The last couple years, I've been helping Todd coach triathletes that need some sound coaching advice on a "successful" bike leg.

This is why "pacing" is the single most important factor in a successful bike leg of a Triathlon.  If you pace yourself correctly, you'll set yourself up for a successful run..capping off a successful Triathlon event.  Trust me!  So, how do you pace yourself correctly?  For me, it's with a Power Meter.  I can't think of any other way to pace yourself "correctly" on the bike.  A heart rate monitor will NOT help you pace yourself on a hilly bike route.  There are just too many variables which affect heart rate.  And, pacing yourself by Rate of Perceived Exertion (RPE) doesn't work either.  So, now, how do you pace yourself correctly with a Power Meter?  According to Allen/Coggan, you want to ride/race an Ironman Triathlon at 68-78% of your Functional Threshold Power (FTP).  Remember, FTP is your "hour power".  Your maximum sustained average power for one hour.  If you don't know what your FTP is, or you don't have a Power Meter (shame on you), we're talking Zones 2-3..mainly your Tempo training zone.  Again, that is the average.  There will be times during the bike course where you exceed that, for example on the hills.  But, the average will be in the 2/3 Zone.  Again, this is an average for the average age-group triathlete.  Elite athletes will be able to go a little harder in some cases Zone 3/4 as an average and still do well on the run.  For you Power Meter owners, you definitely need to know what your "current" FTP is to pace yourself correctly.  Not only does FTP change from year to year it also changes from month to month..which is why I recommend periodic performance testing.

If you're an Ironman Triathlete and you'd like some help in pacing successfully for your event, email me: mullerrj@comcast.net and I'll give you some advice/tips..better yet, why don't you join us in beautiful Lake Placid so you can experience it first-hand.  I'll have some Demo Power Meters for you to try out and you can see, first-hand, how much easier it is to pace yourself on the bike with a Power Meter.