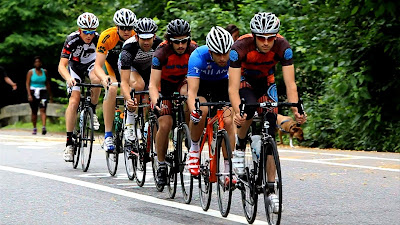 1.  First and foremost, if you don't feel comfortable drafting closely behind the rider in front of you (and I'm talking 6-12 inches) then DON'T!  If you touch the wheel in front of you, guess who is going down?  Not the rider in front of you, YOU are.  And, guess who else is going down?  Everyone that is following closely behind you.  So, again, if you don't feel comfortable stay in the back of the group and when riders that are done pulling up front slide back to the end of the paceline leave some room for them to get in- and tell them to GET IN.

2.  Secondly, keep the pace.  For every paceline there is an average speed.  If you're paceline is averaging 25 mph, then maintain 25 mph.  Don't accelerate or decelerate when it's your turn to pull.  Keep a steady pace and look down at your bike computer to ensure you're maintaining 25 mph.  Make sure you have an accurate bike computer on your bike that shows speed.  You can't guess.  Naturally, if the road goes uphill you most likely won't be able to maintain 25 mph so don't break your back trying to maintain 25 mph...20 mph may be fine.  If you have a power meter on your bike and you were pushing 200w on the front to maintain 25 mph then continue to push at 200w on the hill.

3.  Don't jam on the brake.  That's right do NOT brake hard for any reason.  If you have to adjust your speed in a paceline there's two ways to do it, the first I prefer is: move out of the slipstream or "air" brake. The second is to stop pedaling or soft-pedal (pedal w/ little to no resistance on the pedals).  If you have to touch the brakes, then do just that, "touch" them or "feather" them, do not grab a handful of brake.  If you brake hard it does nothing but cause a potential crash behind you.  If you see a pothole that's too late to avoid- try to avoid it or if you have to go through it..but DON'T brake hard. Same with anything that runs in front of you like a squirrel, fox, deer, ground hog, dog, etc.  Try to avoid it, if you can't- hit it!  If you brake hard you're going to cause a crash behind you.

5.  Point impediments out on the road. i.e. potholes, sticks, gravel, rocks, roadkill, black walnuts, etc.  Don't be afraid to yell it out for all to hear.  If there is a rider up or a car up, announce it.  If there is a walker on the side of the road, announce it and signal it too.  Also, if you're up front and you're slowing, for whatever reason, announce it- SLOWING.

6.  Nobody says you have to stay out front and pull for any given amount of time.  If you feel strong, stay out front for 2-3 minutes, if you're not feeling good, then perhaps only 1 minute is all you've got in the tank.  When it's your time to pull-off do it gradually and noticeably so the rider behind you knows.  A flick of the elbow will tell the rider behind you which direction you'll be pulling off to.  Most often it's done to the left- that you pull off.  When you do pull off, slowly drop back to the end of the paceline.  If you're the last rider in the paceline, tell the rider that is slowly drifting back that you're the last rider so they can safely get in behind you.  I've been in pacelines that were moving at close to 30 mph and if you didn't know where the last rider was in the paceline you risked missing the draft and getting unhitched.  And, good luck trying to catch back up to a paceline averaging 30 mph.

7.  If you're in a paceline and you're really gassed (beat) nobody says you have to pull every rotation.  If you don't want to pull, or you want to skip a turn, when the rider that pulled off is slowly drifting back leave them some room to get in between you and the rider in front of you and tell them- GET IN!