A few posts ago I told you I bought a 5000 lumen 2x Cree XML bike light, battery and charger for $22.   https://www.amazon.com/gp/product/B00F372QSE/ref=od_aui_detailpages00?ie=UTF8&psc=1   Hard to believe huh?  Well, it was hard to believe because the 4400 mAh battery that came with the light could not power the light on the med setting for 1.5 hrs.  So, I was in search for a new battery that would last at least 1.5 hrs. on medium power which projects about 500 lumens, not 5000 as advertised.  Well, I found one for $15 and the best part is, IT WORKS!  Here it is:
https://www.amazon.com/gp/product/B00AAQOV5E/ref=od_aui_detailpages00?ie=UTF8&psc=1

The Mfg. claims it's a 6600 mAh capacity battery.  It could be.  I ran my light on medium setting last night for 1.5 hrs. and the bike light showed a minimum of 80% power left in the battery at the end of the ride.  That's pretty damn good if you ask me.  The only thing I didn't like about the new battery is that the coax end connector didn't have threads on it so that the lights coax connector could screw onto it providing a waterproof secure connection.  So, what I did was cut the connector off the 4400 mAh battery that had threads and swapped it out with the 6600 mAh.  It took me 20 minutes to solder and tape the connector on.  The best part is, it's now secure and waterproof.  There's an internal o-ring at the end of the bike light connector.

For $37 you've got a "waterproof" high power LED light, battery and charger that rivals an LED light that cost over $200 just 5 yrs. ago.  Plus, it's smaller and a lot lighter than bike lights of yesteryear. 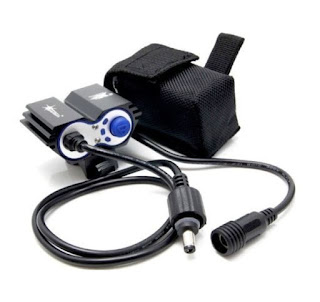