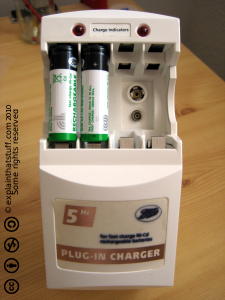 Traditionally, October/November is the start of the off-season for most cyclists..depending upon whether you're still racing Cross or not.  This is a time for relaxing, recharging the batteries, spending time with the spouse/girlfriend (or both..haha), doing those MUCH NEEDED chores around the house- you've put off since May/June, cross-training (running, swimming, hiking, fishing/kayaking), etc.  It's not only a "physical" break but it's a "psychological/mental" break as well.

Lets talk about "recharging the batteries" because I think the battery analogy is a good one which pertains to cycling racing/training- especially this time of year.  Specifically, we'll talk about NiCad battery charging/discharging because NiCad (chemistry) batteries are known for their "memory effect".  That is, when you repeatedly discharge NiCad batteries to a certain level (lets say 50%) and re-charge them fully they end up losing their capacity after a while.  Instead of recharging back to 100% of full capacity they may only recharge back up to 95% of full capacity.  Think of your training load (frequency, duration & intensity) and its effect on your overall fitness analagous to battery discharging and its effect on battery capacity.  When you train during the week and race on the weekends during the summer, your training load is pretty high.  Rest will re-charge your batteries to full-charge and get you back to peak fitness.  But, is this full-charge in August/September (at the end of the race season) the same as the full-charge in May (at the beginning of the race season) when you were at your peak fitness level?  I have power data from various athletes that says, "No, it's not".  I've seen a lot of athletes that have an FTP of 300w in June (their peak) and by the time August rolls around it's more like 290w.  That's not a fair assessment though since a lot of that could be attributed to "burn-out" though..that the athlete is just "mentally" spent instead of "physically".  Personally, I think the reason for the FTP decline is a combination of both "mental" and "emotional" burnout.  But, you get the point.

October/November is a great time to let the batteries discharge to say ONLY 80% during training- instead of the routine 50% during the racing season.  When you rest and re-charge the batteries back up to 100% you'll get rid of that memory effect that you created during the summer and reach higher capacities (FTP).  Notice I didn't say to discharge the batteries down to only 98% instead of 80%.  Doing that is analagous to doing nothing during the off-season. i.e. sitting on your a$$ drinking beer and watching football on TV.  You don't really want to do that, trust me..been there done that.  And, likewise, you don't want to run the batteries down to 25% either (high training load)- which I consider too much too soon for the off-season.  Albeit, running batteries down to near nothing (which is similar to a high training load) will also get rid of the memory effect...but as I said, I don't recommend that during the off-season or you're a candidate for injury.

Simply stated, by getting more rest, spending less time (duration and frequency) on the bike and cross-training during the off-season, you'll break the memory effect created during the Summer and realize a higher fitness level/capacity the following Spring.  Additionally, you'll prevent mental burnout by the time the Spring rolls around.  You can still ride hard during the off-season but I'd reserve that for indoor interval training and shorter rides outside.  I'd utilize a progressive resistance/power training program for that though.

Power ON! Coach Rob
Posted by Rob Muller at 4:00 PM