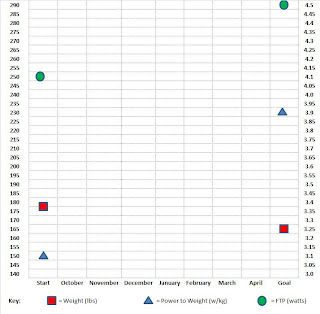 Unlike most athletes, I have already started my 2011 Training Season.  That's because I plan on racing Battenkill in April 2011 and I only have 6 mos. of training.  For most of you, RELAX there's plenty of time, unless you have an early season "A" race, you really don't need to start your training until November/December 2010.

There are basically 3 metrics that I'm concerned with during my cycling training.  They are: body weight (lbs), Functional Threshold Power (FTP) (watts) and w/kg (pronounced watts per kay-jee).  Of the three, the most important is w/kg.

Althought I haven't raced Battenkill before, I have talked to athletes that have and I've also seen the Battenkill elevation profile.  Based on that, I already have a good idea of what my w/kg  needs to be in order to be competitive in the 50+ Masters Race I'll be racing in.  I'm guessing to hang my w/kg needs to be close to 4.0.  That's only because there are some pretty decent climbs where I know the men will separate themselves from the boys (or should I say the FAT boys).

As extra motivation, and a daily reminder, I've made up a graph of these 3 training metrics and I've plastered it to my refrigerator door.  It's a daily reminder of where I am and where I want to be (my goals) in April 2011.  I know if I can meet my goals...barring any mechanical failures during the race..I WILL BE competitive in my Masters age group.  Even if I'm NOT competitive during the race...I won't be disappointed because I know I'll already have met my goals.  The rest is just icing on the cake.

So, go ahead, make a chart/graph like mine and plaster it on your refrigerator door with your 2011 goals.  You'll think twice about grabbing that 2nd/3rd beer or quart of ice cream.