Are Sprinters born or made? 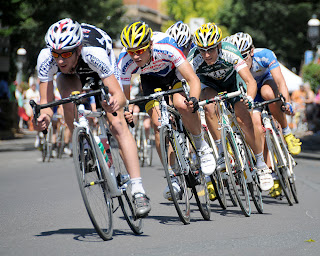 It's actually pretty funny when you think about it- the "skinny guys" can't sprint and the "heavy guys" can't climb.  i.e. both camps want to do what they're not good at.  Before I give you the good/bad news for both sides lets take a look at your body composition.

Basically, you’re born with muscle fibers in certain proportions which will affect how successful you are at either developing as an endurance guy (also include the climber group), or a sprinter guy.  (BTW, road sprinters are actually aerobic endurance guys too.  Only the short-track sprinters are the true so-called anaerobic sprinters)  Most bodies have 50% of Type 1 (or slow twitch muscle fibers) and 50% of Type 2 (or fast twitch muscle fibers A and B), but many elite athletes (world class endurance cyclists and sprinters) can have up to 80% of one or the other.  Obviously a sprinter with 80% fast twitch fibers will have a better chance of being fast than somebody with only 30% fast twitch fibers.

If you want more information on Muscle Fiber Types and how they work, here is a pretty good link that will help explain it in detail: www.coachr.org/fiber.htm

For me, I don't have to perform a muscle biopsy to know, I'm pretty much a 50-50 guy.  I suck at both sprinting and endurance/climbing..haha.  Actually, the reason I'm not such a great climber is because my a$$ is too fat...but I'll be working on that this Winter- reducing it.

Your muscle fiber composition is already built into your genetics.  Yes, you can adjust your training and slightly sway the middle of the road muscle fibers (Type IIa) to one side of the fence or the other.  But, you are NOT going to turn Type I muscle fibers into Type IIb or vice versa.  However, having said that, training can change the amount of area taken up by the fiber type in the muscle. In other words, there can be a selective hypertrophy (growth/increase in size) of fibers based on the type of training.  If you do try to turn Type I's into Type IIs or vice-versa, you're only going to demoralize yourself with hard training where you'll see minimal to zero improvement.  I've seen/heard of "skinny guys" that are predominantly composed of Slow Twitch muscle fibers buying track bikes and going to the Velodrome and doing sprint training every other day in hopes of becoming a Sprinter.  Sorry guys, aint gonna happen. You will NEVER turn into a Sprinter..I don't care how hard you train.  Yes, you will become BETTER at sprinting..but you will NEVER be a Sprinter.  Hey, don't be mad at me..be mad at your Mom/Dad.

So, before you beat up your Mom/Dad for your genetic curse..why not alter your training and race strategy to take advantage of what (strengths) you do have?  For example, say you're one of those "skinny guys" and you've resigned to the fact that you're going to race Criteriums.  (Not particularly because you want to but because they're close, your buds do them, they're kinda fun, they're fast, chicks dig em, etc.)  Instead of trying to compete against those "heavy guys" (that are most likely sprinters) in the final 200-300 meters why don't you race your strengths (now there's an idea) and put a serious hurt/acceleration on the hilly portion of the Criterium?  (Provided the hill is long enough to separate the sprinters from the climbers)  Remember, if the "heavy guys" are normally good sprinters they're NOT normally good climbers.  And, although it may hurt you to hit the hills hard, it's going to absolutely throttle the "heavy guys".  BTW, there are a few exceptions..which is why I said "normally".  Mark Cavendish, probably the worlds best sprinter, is actually not a bad climber.  He only looks bad in the Alps/Pyranees because the other Tour riders are excellent climbers..and the fact that the climbs are miles long at 8-10% grade, not 300m long like most hills in Criteriums.  Or, another strategy for you "skinny guys" would be to only sign-up for hilly Crits.  There is nothing wrong with that.

Likewise, if you're a "heavy guy" stay away from hilly road races (and Oreo cookies) where you WILL BE dropped.  Instead, stick to the flat/fast road races and Crits where you have a better chance of standing on the podium after the race.

Remember, your cycling gift or curse is genetic..so stop beating yourself up (or your parents) for not being better at one discipline or another.  (BTW, why does everybody want to be what they're not? haha)  Instead, train your weaknesses and race your strengths..and have fun!  Isn't this why you ride/race?  I hope so.

So, are Sprinters born or made?  I think they're born.  POWER ON! Coach Rob
Posted by Rob Muller at 8:57 AM