I've always wondered how anyone who has spent thousands of dollars on their aero position, in a low speed wind tunnel, is able to replicate that position in a race (time trial).  After all, there isn't an LED or audible warning while riding to remind you that you are, or aren't, in that stealthy position you spent so much time & money to obtain.  (BTW, I'm working on that- an indicator of sorts to make the rider aware that they are or aren't in THE position- stay tuned).


Above left, is a photo of Jason Wood that I had taken in my studio.  Although it was dynamic (he was pedaling), it was NOT race conditions.  Above right, is a photo of Jason that I had taken in a 35k Time Trial on Rt. 29 in NJ.  (There is NO change whatsoever from Studio to Race Day position.  The only thing that Jason changed was the saddle.  You can see that Jason is more forward on his NEW saddle.  That's because his NEW saddle is softer up front and allows him to inch forward without the pain that his old saddle gave him) From the above-right position you can clearly see that Jason's race day shoulder position is more upright.  That is, his shoulder angle is more acute.  Instead of being 105 degrees, like the studio pic on the left, it is closer to 95 degrees on race day.  I like this NEW shoulder angle.  However, what I'm not quite enamored with is the NEW egg-shaped back that he created as a result of this.  Although, having said that, Lance Armstrong has an egg-shaped back in his Time Trial position.  Take a look below and see. 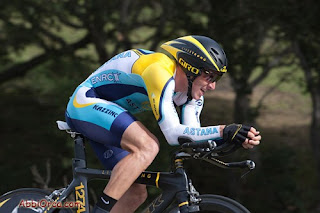 What I do like is the way Jason's helmet topline lies flush with his back.  You've got to believe that this makes a nice laminar flow across his helmet/back in his race-day TT position thus reducing drag.
The experts, unlike me, can dissect/analyze these photos all they want and throw their 2 cents in on what and what should not be the "optimum" position.  However, what truly matters is the CdA- Coefficient of Drag.  (Provided of course that fit/comfort & power output are not compromised).  I'll be determining that with Jason over the next month or so with my iBike Aero/Power Tap power meter combination.
I'm not sure how Jason finished in the 35k Time Trial but I'll bet he was top 5 out of 40 or so racers.  And, I think that is pretty damn good for a relatively new Time Trialist riding a used bike that was NOT customized to his body/size.  Jason was also NOT riding with a full disk wheel or skinsuit (which other racers had) which definitely makes ANY rider more stealthy in any length Time Trial...resulting in faster speeds and lower times.  Additionally, Jason doesn't have the thousands of dollars that other racers spent optimizing their aero position in a low speed wind tunnel over the Winter like I definitely know that other racers did.  (Who does have that kind of money to piss away?)  I'm going to try to save Jason thousands of dollars in Wind Tunnel time with my "poor mans wind tunnel"- my iBike Aero/Power Tap combination.  I can't see why I can't.  After all, I can perform testing outside in actual race day conditions on the race course itself.  You can't do that in a wind tunnel.
If I had to guess, I'd say that Jason's optimum position is somewhere smack in-between the Studio pic and Race-day pic.  That can easily be obtained by sliding the seat aft about an inch or so.  By doing that, it will flatten his back more, and put his knee joint more centered over his pedal spindle where it is biomechanically more sound/efficient where it will maximize power output...at least I think so.  We'll see!
Oh, here's a photo of Jason's bud Tom Boonen, another big man on the bike.  Any similarities in TT position? 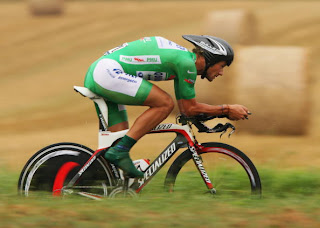