Coefficient of Rolling Resistance (Crr)..what is it? 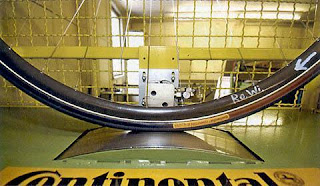 Coefficient of Rolling Resistance, or Crr for short, is a dimensionless number that measures the resistance or drag that occurs when an object (such as a bike tire) rolls on a flat surface.  The higher the number the more friction or rolling resistance the tire experiences.  Most cyclists really don't pay much attention to rolling resistance when purchasing tires.  They believe if they buy the skinniest/narrowest tires and pump them up to the max that they'll go FASTER- i.e. have less rolling resistance.  That's not true at all.  In fact, wider tires actually have lower rolling resistance than narrow tires.  Really?  Yes, really!  Then why don't racers use wide tires when they race.  Good question.  It's because the wide tires are NOT aerodynamic at higher speeds.  They may be fine for slow speeds, i.e. <10 mph, but they're no good for higher speeds.  Did you know that 80% of the total drag for a cyclist riding less than 10 mph comes from rolling resistance and the remaining 20% from wind drag/resistance?  Yup.  And, these numbers reverse with speeds over 20 mph.  That is, 20% of the total cyclist drag comes from mechanical/rolling resistance and 80% from wind drag/resistance.

Here's a couple other reasons why wider tires actually have lower rolling resistance than narrower tires at slower speeds: a) the contact area is less b) less tire deflection (vertical movement) and c) active area of sidewall is shorter.  This can be illustrated below: 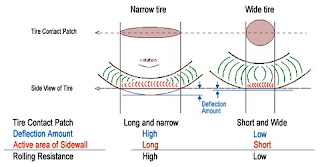 So which bike tires should you choose and what pressure should you pump them up to?  Well, that depends.  It depends on what you're looking for in a tire.  Do you want good wear, puncture resistance, low rolling resistance, comfort, wet weather grip, etc.?  If so, you're like me- you want it all.  But, the bad news is..when it comes to tires..you can't have it all.  You've got to choose between performance and durability/wearability/comfort.  It's no different with car tires.

For me, I like the Continental Grand Prix 4000s.  (After all, it's German! haha)  The Continental Grand Prix 4000S Road Tire provides a sticky compound, low rolling resistance, and a long tread life. Black Chili rubber and nanotechnology enhance surface contact in the corners instead of slowing you down with a super-soft compound. Continental also added a layer of Vectran Breaker fabric for puncture protection.  I train on them and I race on them.  I think they have good puncture resistance as well as low rolling resistance.  They're rated to 120 psi but I never pump them up past 110 psi.  Why?  Remember, deflection from the image above?  That's why.  You pump them up too high and you'll be doing more bouncing up/down than you will be travelling forward.  Well, not really but you know what I mean.  You can't feel these little minute vertical deflections or bounces when you ride but they're there and they add up.

Here's a great article I found on the internet that gives a better explanation for the compromises when selecting a bike tire.  I don't know who to credit since there isn't an author but it is REALLY very well written and explains things very nicely.  Read it: http://www.rouesartisanales.over-blog.com/article-1503651.html  You'll like it!