The need for SPEED! 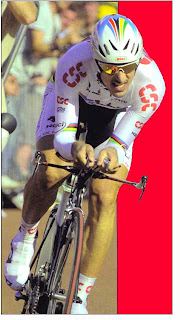 Wanna go fast on the bike?  Doesn't everyone?  Most cyclists, however, don't realize that 90% of the forces opposing them on a flat road is air/wind resistance.  It's those forces that kill speed. The other 10% is made up of mechanical resistance (chain, wheel bearings, etc.) and rolling resistance (tire rolling friction).  The Drag Coefficient (Cd) is a dimensionless number that is used to quantify the drag or resistance of an object (cyclist + bike) in a fluid environment (air).  Basically, it's how easy air slips around you while your cycling.  If you wear a tight fitting body suit while cycling and air is going to slip around you easily.  You wear a loose fitting shirt while cycling and it becomes harder.  The combination of Drag Coefficient (Cd) and Area (A) is CdA, where A= frontal area of rider + bike.  It is this number (CdA) that some of us spend big $$$ on reducing.  Why?  Because if we reduce this number it will require less power to go a certain speed.  And, you can reduce this number in 1 of 3 ways, either: 1) reduce the Cd of the object 2) reduce the A of the object or 3) reduce both Cd and A.
Below is a chart of typical Cd and A values for a cyclist on their bike.  Remember, Cd is how easily air slides around you and A is your frontal area..that is, the area of your bike and body that is seeing the air/wind when you ride:

What should really catch your eye in this chart is the fact that you reduce the power requirement over half to ride at 22 mph when going from an upright sitting position with your hands on the tops of your handlebars to a lower horizontal position with your arms/hands in aerobars on a TT bike.  (Don't forget the power required to maintain a certain speed increases exponentially the faster you ride.)

(BTW, please don't email me and contest the values in this chart.  They are just estimates based on Analytical Cycling charts and references I selected over the internet.  It's based on a male, 5'10" tall, medium build, 150 lbs. wearing regular cycling shirt/shorts on a standard road bike and TT bike.  Oh, if you're curious, the Cd of sphere/ball= 0.47 and most high performance German sports cars (i.e. Mercedes Benz, BMW, Porsche, etc.) have a Cd in the 0.2 to 0.3 range.  Notice the Cd of a cyclist on a TT bike is only 0.80?  That's not too slippery when compared to a sports car now is it.)

where:
Fd= Drag Force usually measured by a Power Meter
p= Density of Air
v**2= Velocity of the bike squared

Therefore, in order to measure your CdA on the bike, all you really need is a Power Meter and a few measuring instruments to measure velocity and air density.  However, it's not that easy to calculate unless you have a velodrome locally that is void of wind and other variables.  Or, you could always take a trip down to the A2 Low Speed Wind Tunnel in North Carolina and spend over $700/hr in a controlled environment to have them do it for you.  (BTW, that doesn't include travel expenses, lodging, meals, etc. either so you're looking at over $1000).  Unless of course, you have a Power Meter and a device such as the iBike Aero like I do.  The iBike iAero is a Power Meter designed by iBike that allows cyclists, for the first time, to see their continuous display of CdA while they're riding.  The iAero compares the Power Meter data to opposing force data and computes drag coefficients continuously, IN REAL TIME!  Is that cool or what?  At least I think so.  I call the iAero a "poor mans wind tunnel".

In the next couple of weeks I will be combining my iAero and Power Tap PM on my road bike and computing CdA values in two positions: on the hoods and in the drops.  I will post that data as soon as I achieve some statistical significance.  Unfortunately, you can't do one calibration ride record the CdA and call it a day.  It's NOT that simple.  Why?  There are just too many variables to control: weather, road conditions, road traffic, etc.  I will, however, post my results in my coaches blog.  When I'm finished with my road bike...I'm going to take Jason Wood and use him as my guinea pig to tweak his current position on his new TT bike.  We have a good baseline since Jason performed a TT the other night on Rt. 29 in NJ and averaged 27 mph for 10 miles..which aint too shabby.  I'm guessing we can dial-in Jason's NEW position and get that average speed turned up a notch to say 28 mph avg.  Who knows, maybe Santa will bring him a new Nike Skinsuit this year so he can reduce his Cd more and perhaps reach 29 mph avg. for 10 miles.

Power ON! Coach Rob
Posted by Rob Muller at 2:11 PM

Hi Rob,
I'm using your blog for my training and I found some surprising figures in your post The need for SPEED (http://coachrobmuller.blogspot.co.nz/2010/06/need-for-speed.html).

I was quite pleased this morning to find out that, before breakfast, I averaged 21 mph for 10 miles on a flat course (1% grade on each half of the course)... with a rather heavy MTB and a new kit of aerobars...

What do you think of that ?