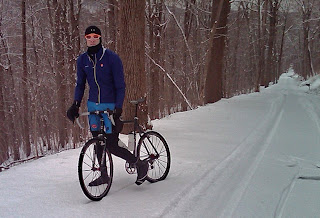 This is Part II of Let it Snow..a former blog..on riding outside this Winter even when there's snow. I've snow skied ever since I was a kid. I was a ski instructor for over 5 yrs. and I raced during College- Penn State Ski Racing Club. After college, I skied some of our Country's finest slopes all over New England and out West. For you long-time skiers you know what it's like to be the first one on a lift and to be the first one down the mountain skiing fresh powder (or 'freshies" as the Snowboarders say). I don't ski hard anymore (two herniated discs). Hell, I don't ski period because when I ski fast/hard the carving/skidding turns just send shocks up my spine..and it hurts. Anyway, I miss my days skiing fast/hard...and that's the only way I like it.

But, I got a chance this past week to get out on the freshies...not on my skis but on my Mtn. bike. I got that same feeling you get when you take that chairlift ride to the top of the mountain..the serenity..the beauty..the quietness of new fallen snow. It only snowed a couple inches but that's all I needed or actually wanted for my ride. Believe it or not, traction was actually good with my knobby Mtn. bike tires. The only places you really have to be careful are at intersections where cars accelerate/decelerate and pack the snow down to ice..making it extremely slippery. That is why I ride on the canal path...void of cars/traffic and anyone for that matter. Actually, what I do is mix up the ride with a combination canal path ride and hill climbs on the roads adjacent to the canal path off of River Rd. (Rt. 29) in NJ. It's really a lot of fun..and a great workout.

Pictured above is Jason Wood with his newly built Cyclo-Cross bike on Tumble Falls Rd. Jason joined me for my canal/hill ride. Unfortunately, Jason took a spill about 2 minutes after this photo was taken, on the descent, where a car had obviously got stuck, spun its wheels and created a packed-snow/icy condition. Jason went down and scratched up his new steed. Guess that's why they call it Tumble Falls Rd...haha. He was ok, but his bike needs some touch-up. Anyway, be careful/alert..and get out there when/if it snows. It really is a LOT of fun...especially if you're a former avid skier like I was.

Oh, BTW, wear a helmet. I don't think Jason was wearing one and he could have been hurt really bad if he had hit his head when he fell. So, wear a helmet next time Jason. I actually wore my ski racing helmet on my Mtn. Bike. I may have looked like a nerd/geek/etc. but my helmet keeps my head/ears warm, in addition to protecting my mellon, and the older I get the smarter/wiser I get. I learned the hard way growing up as a kid...falling while skiing/biking and hitting my head without a helmet on. Plus, as a ski instructor I saw some pretty bad crashes where people hit their heads and had to be med-evac'd to the hospital. Some didn't make it.