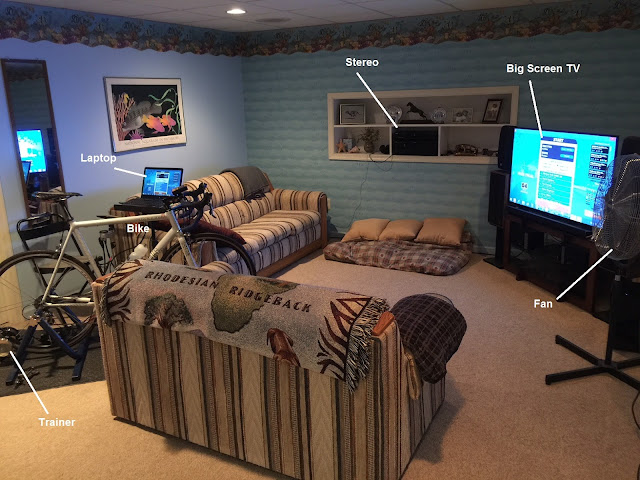 I always have people tell me how much they hate indoor training- so they don't.  That's a shame, because it really doesn't take a lot of effort or cost a lot of money to build your own Pain Cave- as I like to call it- for indoor training.  What are the pain cave essentials?  First, and foremost, you need a a cave.  I finished 1/2 of my basement to make my pain cave.  Carpet, drywall walls, drop ceiling, all basic stuff.  The 2nd, you need a bike.  I use my old (circa 1995) Cannondale Aluminum bike.  It's still a great bike.  The 3rd, is a good "smart" trainer.  What do I mean by "smart"?  It's a trainer that changes resistance automatically as the bike (in your training video) either ascends a mountain/hill or descends.  There are plenty on the market these days.  I have a "Lab Quality" Computrainer that I bought years ago.  It's compatible with all of today's virtual reality software programs like Zwift and ErgVideo.  It's also one of the most accurate trainers on the market.  That is, it reads power output in watts +/- 1%.  Yes, it's pricey ($1500) but I got a great deal from Racermate for being a USA Cycling Power Based Coach.  You don't have to spend that much on a good trainer.  There are a bunch on the market made by Power Tap/Saris, Tacx, Wahoo, Kinetic, etc. that cost half of that.  Fourth, you need a good computer to run the virtual reality software.  I find that a laptop works just fine.  Just make sure the processor speed is fast enough, the video graphics board is fast enough, there's enough memory, and make certain you have a fast (wide bandwidth) internet connection.  Fifth, you need a good monitor/display to project your ride on.  No, a phone doesn't hack it, not an iPad either.  I don't even like laptops since they're still too small for me.  You gotta go big on the monitor.  I either recommend plugging your laptop into a big screen TV or plug it into a projector and project it on to a screen.  I used to project onto a projector screen but now that I have a big screen TV within earshot of my laptop, I connect via an HDMI cable.  Speaking of phones, that is sixth on the list.  If you use Software such as Zwift, you need a smart phone to act as a remote.  Seventh, you need a good fan.  I'm talking near industrial strength/grade to keep you cool during your training ride.  Eighth, you need some tunes..either provided by your phone or by a stereo.  I use my stereo from my college days which still kicks out some amazing sound with good bass.  Ninth is all the other stuff: towel, water bottle, shoes, HR monitor, etc.  You definitely need a HR monitor that is either ANT+ or BLE protocol that talks to your computer and the software on it.  If you use an ANT+ trainer and/or HR monitor you're going to need an ANT+ dongle in your computer so they talk to each other.  My Computrainer plugs-in directly into the laptop so I don't have to worry about dongles or wireless connections. 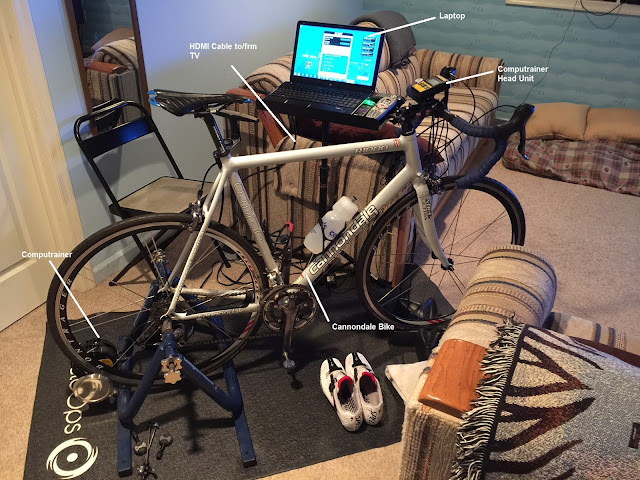 So, stop making excuses on why you don't train indoors or why you hate training indoors.  If you don't train indoors (or you hate it) you probably don't have a decent set up.  Yes, I know these things/equipment costs $$$.  So does every other hobby/sport I know of.  If you're serious about cycling you'll find a way to come up with the $$$ to build/create a similar pain cave to mine.  Beg, borrow or steal some $$$.  No, don't steal..just kidding on that one.  And, who said you had to build it all in a day/weekend.  Rome wasn't built in a day, nor was my setup.  Mine took years to build.  So, start building.  I actually look forward to training in my pain cave on inclement weather days.  Is it as much fun as riding outdoors?  In general, "NO"..but it's the next best thing.  Power ON!  Coach Rob
Posted by Rob Muller at 3:39 PM