Saw a chart today from Alex Simmon's blog re: the usage of Power Meters at Kona's World Championship Ironman Triathlon.  Seems like the Triathlon people are slowly catching on to the benefits of a Power Meter.  At least the more experienced triathletes are. See chart below. 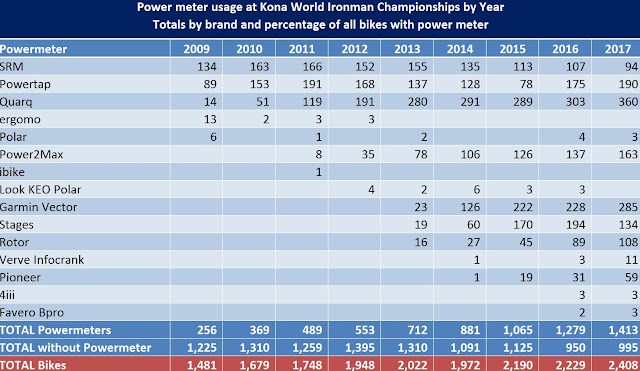 So, why are they gaining in popularity?  Either these athletes have more disposable income these days or power meters are more affordable- or both.  I think it's more the latter.  Regardless, I think it's great.  When I was actively coaching both road cyclists and triathletes back in 2011, there were hardly any triathletes with power meters on their bikes.  Yes, I admit price was probably a deterrent since even in 2011 a decent power meter would set you back $700.  But, what I found more common was that they didn't know how to use them even when they were given one to demo.  That is why I joined Todd Wiley (TWiley Sports) for his annual Lake Placid Triathlon Camp in May.  I gave a presentation during the weekend camp on the benefits of power meters for triathletes.  One of the primary benefits to someone doing the Lake Placid Ironman is/was pacing themselves.  The Lake Placid course bike ride is 2 x 56 mile laps that are very hilly.  If you go out too hard on your first lap, you'll most likely cook yourself for the 2nd lap and more importantly wreak havoc on your marathon run.