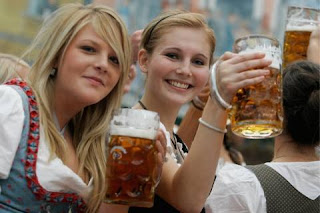 If you're like me, you're enjoying October.  What's not to like about this month?  Cooler weather, football, beer, kids back in school, more beer, etc.  Yeah, hard for me to stay away from beer during the Fall months..especially when I'm drinking a nice Octoberfest beer while watching a good football game.  Do I feel guilty doing this?  Hell No! I'm enjoying life.
The only problem with Fall, particularly October, is that the days are getting shorter (less light to ride outside) and the weather is often unpredictable (cold and rain).  Despite beautiful sunny mid-day temps in the 60s, the weekend morning temps are generally in the upper 30's/low 40's which is a little nippy for me to get excited about riding outdoors.  (Yup, I'm getting softer in my old age.  When I was ski racing in my 20's, I'd train/race in 20-30F temps regularly...and love it!)  Also, my favorite football games are generally on TV from 1-4pm (on the weekends) when the day is the warmest- and the best times to be outside riding.  So, it's easy to see that more drinking and less riding is a recipe for weight gain and declining fitness.  That's ok, because I really believe that your body and mind require a break from cycling..whether you're an avid racer or just a recreational rider.  However, having said all that (including making excuses why I'm not riding regularly), what you do NOT want to do..is lose so much cycling fitness that you dip below last year's power level.  For example, if I performed an FTP test back in October of 2010 and my FTP was 250w, my goal for this October would be to be at or above this number.  If I'm below this number, I'm going to have to work even HARDER (and SMARTER) than I did last year to be stronger in 2012.  That's why periodic testing is so vital/important.  Just like periodically jumping on a scale to check your weight, you should be tested (periodically) to see if you're losing power.  After all, nothing matters more than w/kg when it comes to cycling longer/faster/stronger.

Just like it's inevitable that you'll gain a few pounds when the season ends, you WILL inevitably lose strength.  But, what a lot of riders don't realize is that MOST will actually start losing that strength DURING the height of the cycling racing season.  I can hear some of you saying, "BULLSHIT!"  Well, if you don't believe me, test yourself in the middle of the racing season and at the end.  You can test yourself in the gym and out on the bike.  I will bet you a beer (can you tell I like beer?), that not only will your FTP be higher on the bike mid-season, your leg strength (measured on any gym machine) will also be higher.  Ok, for the minority that say, "My FTP was definitely higher at the end of the season than it was DURING the season", my question to you is, "WHY?".  The only acceptable answer, in my opinion, is that you had an "A" event in the Fall that you were peaking towards.  If that's NOT your answer then you need to adjust your ATP for 2012 so you peak earlier.

Enjoy the Fall, just don't let the "good times" (drinking beer, watching football on TV, etc.) keep you out of the gym or off your bike.  This is a GREAT time of the year to ride your Mountain Bike, Cross-Train (hike, roller-blade, yoga/pilates, swim, etc.) and Strength Train (particularly core and legs).