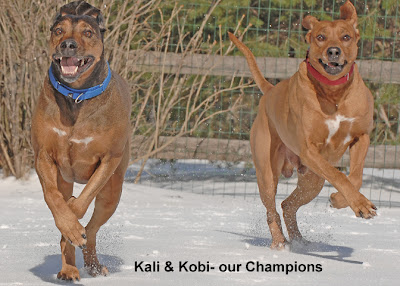 It's with a heavy heart to blog that we had to put down our last AKC Rhodesian Ridgeback Champion- CH Dimond-Regals Sure Shot "Kobi" on Friday night.  Kobi passed-away just short of his 10th birthday.  Like Kali, our other Champion who died a couple years ago at age 7, Kobi succombed to Cancer..not only a nasty F'n disease for humans but also for animals.  Kali and Kobi were both Rhodesian Ridgebacks.  Kali was a "Field" Champion and Kobi was a "Conformation" Champion...a show dog.

You may be thinking, well that's too bad..but what does this have to do with cycling?  Believe it or not, my Kali was my training partner when I started doing Triathlons in 2002.  She was my running partner and she was also my cross-training partner.  She used to run with me while I was rollerblading.  She just loved being outside...and she loved to take walks and run.

I don't know if many of you knew that I was very much apart of the AKC Rhodesian Ridgeback Conformation and Lure Coursing scene in the early 2000s.  My family spent just about every weekend at either a lure coursing event or a conformation (show) event.  Lure Coursing is an AKC Field Event for purebred sighthounds where they chase a white trash bag around a course.  The white bag looks like a bunny when it's put into motion.  Here's a link: http://www.akc.org/events/lure_coursing/  We're not involved with RRs anymore except for my wife is still involved in Rhodesian Ridgeback Rescue.  Just after my Kali died, we rescued our Ridgeback (Briar) from a puppy mill in Ohio.  We still have Briar.  She has come a long way.

Kali was my scholar-athlete..the smartest dog I have ever known/met and also one of the most athletic dogs I have ever met or known.  (Notice I said "ever met" not "ever owned".)  When I weighed 222 lbs. (yes I weighed that much in 2002) I was able to bench-press 275 lbs.  I was not really fat per se..just big all over.  (ok, maybe a little fat..ha)  And, despite being that big/strong my Kali at times could drag me to the ground..especially when she was lure coursing. I can't tell you how many collars she broke, or how many people she dragged to the ground that were trying to hold her when she saw a bunny or a squirrel.  Oh, how she loved chasing the bunnies.  My girl was a Nationally ranked AKC Lure Courser in 2002.  In fact, she gained her Field Championship in less than a year..a feat that not too many sighthound dogs of any breed achieve.

Kobi was our "pretty-boy"...our somewhat aloof handsome man.  Oh, how he loved the ladies.  I'll never forget at the Rhodesian Ridgeback National Specialty in Virginia Beach (in 2003) how my Kobi man tried to mount a female WHILE he was lure coursing.  Yes, while he was in a race.  (Later on, we found out the bitch was in heat...so no wonder).  Although he was a handsome man, it took him a while to obtain his AKC Conformation Champion status.  That's because Kobi was a tad smaller than most RR males.  In fact, at first glance, most people thought my Kali was the male and our Kobi was the female.   That's because my Kali was VERY dark for a Rhodesian Ridgeback..definitely not the breed standard.

I will miss our Kobi dearly just like I still miss my Kali.  It's been over 2 yrs. since my Kali passed away and there is not a day that goes by that I don't think of her (and miss her).  I'm sure Kobi will have the same affect.  I have cried my eyes out the last two days and am sure many more days to come.  That's how much my dogs mean to me.  They are like kids to me.  Although he was more my Daughter's dog, he was still one of my kids..and will be missed very much til the day I die.  He was such a good boy..he never snapped at anybody or anything..EVER.  He just barked when someone (or something) scared him or if something wasn't right.  I think he was smarter than I thought.

To my Kobi man..I miss you bud..have fun with Kali til we all meet again.  Dad
Posted by Rob Muller at 11:21 AM