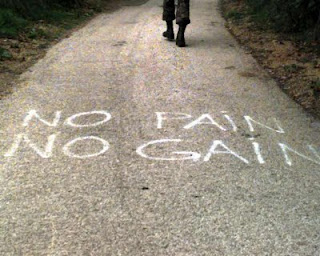 I'm sure you've heard it.  Or, perhaps you may have seen/read an article or two written about it over the years.  This exercise motto/proverb asserts that if you don't feel any pain while working out/exercising then you are probably wasting your time.  That is, you won't see any fitness/performance gains.  Is this a myth?  It probably isn't too far from the truth.  Actually, I'd rather see my athletes train at or near their pain threshold than the other extreme/direction.  Why is that?  Because there are more physiological adaptations taking place in your body (that lead to performance increases) when you train at or near your "pain threshold".

I know that many of you are transitioning from Road to Cyclo-Cross racing.  I also know that many of you are hanging up the racing shoes for the year.  For those of you that are hanging up the road racing shoes, my advice is to get at least one Lactate Threshold (L4) ride in a week throughout the Fall..whether you get it on your road bike, mtn. bike or basement trainer.  Just 60 minutes at or near Threshold will help prevent any major fitness loss.  (If I can't get a 60 minute Threshold session in, I'll do two 30-minute sessions two days apart during the week).  Theoretically (and Physically) you should be able to ride at Threshold for an hour.  In fact, that's how we define Functional Threshold Power (FTP)..it's your maximum sustained average power over a one hour period.  Or, put simply, your "hour power".  You can combine the Threshold ride with your 3 hr. weekend ride..or, you can do it on a spin bike in the gym or in your home during the week.

If you do that, one threshold ride per week, it will hold you over through September/October and have you in relatively good shape to start your Annual Training Plan in November/December.  That's assuming you don't hibernate to the couch watching football all weekend, drinking beer, eating and getting fat.  When the Winter Training Session starts, I normally drop the one hour Threshold rides (initially) only because I'm traininig/riding at least 3-4 days per week at L3/L4 Sweetspot instead of riding just 1-2 days at L4.  My Winter L3/L4 Sweetspot Level almost becomes my L4 Threshold Level of the Fall.  That's because my Power increases relatively quickly when I first start my Annual Training Plan..as does most athletes.

The important thing to remember is to get at least one hi-intensity ride in per week this Fall.  Also, if you train with a Power Meter, I recommend you do an FTP test on yourself.  Or, better yet, email me and I'll tell you about the Performance Testing I'll be running at Fusion Fitness, with my friend Fernando Peredes, this Fall.  (That's the game plan anyway..need to hammer out details with Fernando)  You MUST know what your current FTP is to be in the proper training zone.  You'll be surprised how quickly your FTP drops when the racing season is over.  You Cyclo-Cross guys are just putting off the inevitable..i.e, a decreasing FTP.  That's not a bad thing..your body's (of all cyclists) need some serious R&R after a full Road and Cyclo Cross season.  If you don't train with a Power Meter, just make sure the one hi-intensity ride per week is "uncomfortable".  You don't have to train in pain..but then again, you're not too far away either...or shouldn't be.