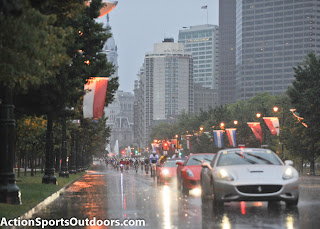 I enjoy fun/charity rides almost as much as I do racing...possibly even more.  What's not to enjoy?  Here are the advantages:
a. No pressure to perform.
b. You can ride at your own pace.
c. You meet new/exciting people and make new friends.
d. You get to stop and have something to eat at the Food Stops...REAL food...along the route.
e. You get to eat REAL food after the ride.
f. You don't have to worry about being dropped.
g. You don't have to worry about crashing...normally...(ha, see more below)
h. You can go as hard/fast as you want...or as easy.
i. You can make it your own race..provided you stop at all the stop signs and traffic lights.
j. Your money goes to charity instead of some race promotors/directors pocket.
k. You're helping a good cause.
l. You can always sign-up on race day..if you think the weather will be too severe for you.
m. The riders are nicer/more friendly than racers...probably because they're not trying to prove anything...and probably because they're just happy to be able to ride.
n. You've got sag wagon support along the route if you need it.
o. You get to ride for 5+ hrs. if you do a century ride.
p. You get a chance to win prizes after the race.
q. You at least get to drive home after the race with a T-shirt or something for the effort and entry fee.
r. Some rides you get a chance to ride with a REAL Pro.  In the Univest GP Cyclosportif ride, two years ago, you could have ridden with Bobby Julich.
s. Etc.

Anyway, you get the point.  Yesterday, I attended the 2011 Gran Fondo Colnago Philadelphia Bike Ride.  No, I didn't get a chance to ride in a torrential downpour for 5+ hours (been there done that) I got to stand outside in it and take photographs.  Actually, I got to drive my car along the route and take pics so I didn't have to stand outside.  And, at the end of the event I got to take pictures under a huge tent/canopy..so life was good.  I was going to take my Moto to shoot photographs but the roads were already flooded when I headed out at 5 a.m. from my house in Doylestown.  Boy am I glad I didn't take it..I would have dumped it on the flooded streets I drove on getting to/from Philly.

Despite the torrential downpours all of the 1000+ riders (yes that many even in the rain) that started made it to the finish line with a smile...albeit some were banged-up and bleeding from falling on the rain-slick roads.  In fact, on one particular steep descent I was following one guy that I thought was going a little too fast downhill.  Just as that thought crossed my mind, the guy locked up his rear wheel and skidded off the roads into the woods- head over heels. I  stopped to see if he was ok..and luckily he was.  He lucked out that he fell into the grassy bank just nearly missing a BIG tree.

I met a lot of interesting/fun people after the race while they were eating- and actually made a couple business contacts for future photog events.  One guy was telling me he wanted to buy a power meter and start to race. (Music to my ears).  We chatted for a bit and I discovered that this now svelte 150 lb. biker used to weigh 240 lbs.  Can you believe that?  He dropped 90 lbs. and now he wants to race bikes?  I think that's AWESOME!  Cycling obviously saved this 30 yr. old's life.

If you race and haven't done a charity ride lately...do one with some friends..or just go solo and meet new friends.  You'll be surprised at how much fun you'll have...even on a nasty rainy day like yesterday.