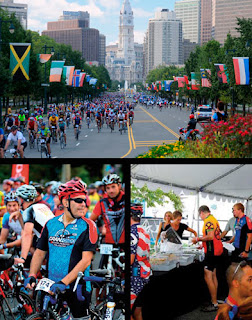 Get ready, in two weeks, on Sunday August 14, 2011 as the GFC Philly returns to the City of Brotherly Love.  Last years' first annual ride in Philadelphia was a HUGE success.

There's a King and Queen of the Mountain climb (and awards) on the 108 mile ride/group.
I just want to mention one thing about this ride..it is NOT a race.  I repeat it is NOT a race.  If you race this course, and blow stop signs, lights, etc. (like some did last year) you're going to get hurt (or get a ticket) because it's NOT a closed course.  And, although you may have a moto out front (like me) you still MUST stop at all stop signs, lights, etc...just like a car.  The riders that usually try to race the course are usually wanna-be pros that don't normally race a sanctioned USA Cycling event.  To them, this is their day.  That's all well and good..but remember, you must obey the traffic signs/signals...or you're going to pay one way or another.

Also, the KOM and QOM awards don't go to the first person that reaches the top of the hill/mountain from the starting line.  There is a timer at the bottom of the climb thats starts your climb time and one at the top that stops your climb/time.  So, if you want to win the KOM or QOM award, it would be prudent to take your time from the start, sit-in and draft, up until the climb..then GO FOR IT!  Just be sure to check and make sure this is correct before you start.  I don't want you coming after me telling me I blew the KOM or QOM award for you because I fed you bad dope.

The event is first-class.  The 108 mile route is beautiful, challenging, scenic, etc. starting from the steps of the Art Museum in Philly (next to the Rocky statue...GO ROCKY!) and finishes in Fairmount Park.  The food/spread at the finish line is second to none.  It's worth the entry fee alone..if you can stuff that much in your mouth..ha.

Lastly, make sure you hydrate properly and fuel yourself properly BEFORE and DURING the event.  There were quite a few riders that dehydrated and bonked on the 108 mile course last year.  It was hot..and I can't imagine it being cooler in two weeks than it is now.  So, BE PREPARED!  Also, put some sunscreen on.  4-6 hrs. plus is a long time to bake in the sun.  You might want to also put some chamois creme on too..otherwise you're legs/butt will be sore.  It's going to be sore anyway, but you don't want it bleeding.  And yes, there were some bad cases of bleeding saddle soreness from last years race.  One poor gal could hardly walk from the Ambulance after the ride.

Here's the link for more information on GFC Philly..read it all: http://granfondousa.com/philadelphia/  The ride starts at 0700 and it's a mass start.  The mass start photo coming up the Benjamin Franklin Parkway is actually my photo that I took last year for GFC Philly.  It's a great shot (if I say so myself) with the flowers in the foreground, riders in the middle, and William Penn looking down from City Hall in the background.