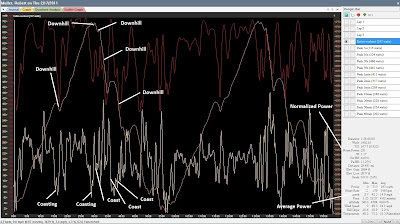 I'm often asked, "what's the difference between my average power for a ride vs. normalized power?".    Before, I answer that question I need to define each term.

Average Power is computed by taking the power readings over the entire ride and dividing it by the number of readings..usually at 5s intervals.  So, for example, if our ride is 60 minutes (3600 sec) long, our computer is taking 720 readings.  As you might expect..those 720 power readings during a hilly ride may be 400w one minute and 200w the next.  Actually, they may be 400w one second and 200w the next.  And, if you're not pedaling..the power readings will be 0w (at least they better be or your Power Meter is out of calibration).  So, your computer displays average power, after an hour of riding, by summing up all those 5s intervals and dividing by 720.  Now, one thing I'd definitely check on is if your computer (whether it's a Garmin Edge, Saris Joule, etc.) computes average power including zeros (0w) or not.  I know with the Saris/Cycleops computers you have an option to include/exclude zeros.  I always exclude zeros because I only want to know what my average power is when I apply force/speed to the pedals during my rides.

Normalized Power  is computed with a complicated algorithm which takes into account the variability of your ride such as: wind, coasting, drafting, accelerations, uphills, downhills, long steady grinding, etc.  Normalized Power is a better indicator of the true metabolic demands of your ride than average power. Basically, it's the wattage you would have averaged if you had pedaled smoothly for the entire effort/ride- the power that your body "thought" it was doing. Normalized Power provides a better measure of the true physiological demands of a given ride than does Average Power.

Normalized Power is therefor a more accurate way of quantifying the actual intensity of the ride. i.e. how hard the ride was. Personally, I like NP vs. Average Power because NP is ALWAYS higher..haha.  At least for the hilly rides I go on they are.  (You'll notice that on steady trainer efforts NP=Avg. Power)  I've included an example ride from a recent trip to Red Rock Canyon in Las Vegas to show you the difference btwn NP and Avg Power.  You can see on the first climb of the day, there were moments where the road either leveled off or even descended for 100 yds. or so.  I can tell you for a fact I was either NOT pedaling or soft pedaling during these short periods. i.e. I was recovering...ha.  The same with the descent.  During these periods, the cycling computer (iBike PM in my case) was computing both Normalized Power and Average Power.  My Average Power for the entire ride was 197w. (not very high for a 2 hr. ride)  That does NOT include zeros (0w), since I told my iBike not to include those in its calculations, but what it does include is soft-pedaling during the flats or descents where the watts were probably around 100w or so. (I think my top speed was 40+ mph..and I know I passed at least 3 cars on the way down the mountain..haha.)   You can see that the Normalized Power for the ride was 231w. (which is more representable of a TOUGH 2 hr. ride- at least for me it is... more respectable too.)  BTW, that WAS a tough 2-hr ride for me and I felt like sh$t for the most part.  I'm not sure what it was but I'm sure it had to do with the following: very windy/cold day, the altitude (close to 5000 ft), jet-lag, steep climb at points, my FAT A$$, heavy rental bike, etc.  (nice list of excuses huh?  hey, I'll be the first to admit I'm no power horse).

Hope that answers the question.  In the future, keep tabs on both numbers and see if there is a BIG delta/difference or not.  You'll generally see the biggest deltas on hilly rides.  Power ON! Coach Rob
Posted by Rob Muller at 11:18 AM

Hi, I recognize this is an older blog but I've got a quick question I'm hoping you might be able to answer. I have an athlete who recently completed a trainer ride of 3' over threshold/ 1' of spin X 6. I was surprised to find her avg watts were consistently about 5 watts higher than her normalized power (about 242 vs 237) for each of the repeats. I'm curious as to what might cause this seemingly reversal of logic. If you have any thoughts I'd appreciate them.

Hey Skippy. That is because the NP algorithm takes a rolling 30s average which causes the first 30 sec of the intervals to be recorded as too low. AP does not do this.