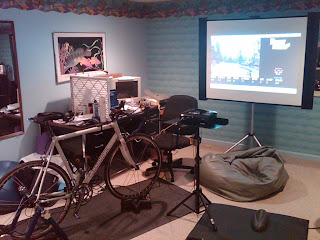 Only 4 more weeks to the start of Football Season..CAN'T WAIT!  I absolutely love the Fall.  (A close second to Spring in my book.)  What's NOT to like about the Fall?  Cooler Temps, fresher cleaner air (where you can breathe), greener grass, more colorful trees, etc.  The only thing I don't like about the Fall..is that it doesn't last long enough...and the fact that the days get shorter and we run out of light for riding after work.

Thus, to continue riding your bike in the Fall, and to stay in shape, you have two options: 1) throw a light on your bike and ride at night or 2) start riding indoors.  For me, I do both...although I'm not a fan of riding solo at night.  Hell, it's bad enough riding in broad daylight on the roads.  If  you're anything like me, however, you absolutely detest working out on a trainer (solo) indoors.  It's not so bad suffering in an indoor spinning group..but on your own (solo)?  Terrible!

To combat the boredom, dislike, monotony, etc. of indoor training..I use a Computrainer by Racermate.  The Computrainer is a virtual reality trainer that I have wired to a computer and to a projector.  Just setup your bike on the trainer and connect the Computrainer to a computer.  The computer runs the Computrainer Software and projects the image on a HUGE 80" screen in Hi-Def.  (See Photo above)  The computrainer will record the workout, whether it's an interval workout or a virtual reality 3D course workout like Ironman Lake Placid.  This year I plan on purchasing another Computrainer and networking them together so I can use the Multi-rider software and ride with/against a friend..  For now, the trainers will be networked in my basement.  But, I'm already looking for a place to move everything into (locally) where I can buy more Computrainers and network them all together...creating a Virtual Reality Power Spin Class.

The Power Spin Class will NOT be limited to Computrainers.  I'm already thinking about including Saris/Cycleops Power Beams and having those that own Power Tap wheels bring them to Class and use them with their basic trainer.  So, you'd have a Power Spin Class with CTs, Power Tap wheels/trainers and Power Beam Pro's.  For class, we can either use the Virtual Reality 3D course videos from Computrainer or DVDs/CDs from a NEW company called http://www.epicplanet.tv/  Check em out online.  They make 3D courses for both Saris/Cycleops Power Beam Pro and for Computrainer.  In fact, I've been in-touch with Allen Jones of Epic Planet TV and (as of now) he's coming to Bucks County in October to film an Epic Pennsylvania video.  How cool is that?

For those of you that aren't training/racing with Power..I'll be giving weekend Seminars at some of our Local Bike Stores (LBSs) promoting Training/Racing with a Power Meter.  The Seminars will tell/teach you EVERYTHING you need to know about training and racing with a PM.  After the Seminar we'll have a Virtual Reality Demo where you can ride the 3D course..and after that..what else...a Power Spin Class/Session.  If you don't have a Power Tap Wheel/Hub or a Power Beam Pro..we'll rent you one.  Can't be any easier.

Steve Hawkins, friend and Middle Atlantic Regional Manager for Saris Cycling Group, doesn't know this yet..but I'm going to recruit his help for this effort...as Steve knows a lot about Power Taps/Power Beam Pros and is starting to ride with Power himself this year.  So, you'll get a LOT of good information.

Stay tuned for further updates on Indoor Power Training & Seminars coming to an LBS near you this Fall/Winter.  Power ON!   Coach Rob
Posted by Rob Muller at 7:53 PM