This past week I had the pleasure of joining my friend, coach, pro-triathlete Todd Wiley at a Power Spin Session he was instructing/running.  During our warmup, I was wondering why my PM was reading lower than what I thought it should be.  Was I REALLY that out-of-shape?  Could be!  After all, the only workouts I had in October were my 12 oz. curls of Octoberfest (bottled) beer while I was sitting on my fat a$$ watching football on TV.  I said nothing and continued on.  When the workout started and it was my turn to pull (in our imaginery indoor pace-line) I was cranking it up pretty good.  My PM read between 120-170w.  I knew this couldn't be right because my HR monitor said I was definitely riding Threshold pace.  And, even in the off-season..I know my Threshold Power never drops below 225w.  (At least in the last 5 yrs. it hasn't dropped below 225w).  So, I knew something was wrong.  After a minute or so, I figured it out.  My Garmin Head Unit (Computer) was reading the gals PM next to me..not mine.  Stupid me forgot to sync my head unit with my PM and instead of reading my PM I was reading the gals next to me..duh!  But, that's the beauty of knowing your FTP and riding/training with a PM.  After a while you pretty much know where your power is just based on your RPE and your HR.  Funny, I just realized that my FTP swings 50w from 225w in October to my peak of 275w the end of May.  Next year, I'll try to make sure that I don't let it drop below 250w (in the off-season) and see if I can get it up to 300w the end of May.  It would be a good test. 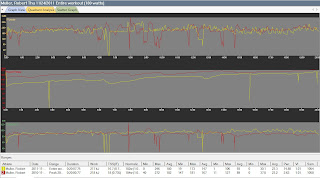 Another advantage of training with Power is comparing your fitness from year-to-year.  Training Peaks Software has a pretty cool feature called Multi-file/Range Analysis where you can compare two similar rides a year a part.  What I like to look at is my HR delta at the same Power Output..in this case 180w.  In the figure above, you can see I rode a pretty similar stretch of road on my Erg Video 3 software.  It was an L3 Tempo Workout where I compared the first 20 minutes of the ride.  My HR in 2011 was almost 20 bpm LESS (145bpm avg. compared to 165bpm avg.) than it was in 2010.  That's pretty good.   However, I'm NOT getting too excited about that..because I could have been more rested for this ride (in 2011) than I was last year.  I could also have been better hydrated, cooler, etc.  There are a lot of factors that affect HR..which is why I don't train by HR alone.  Nonetheless, I'm pretty happy that I'm not in as bad a shape as I thought I was.  More testing in the next couple weeks (performing similar comparisons) will reveal the truth- is my fitness level really better than last year (the same time)?  My PM and HR monitor will tell the tale.

Time to chow down on some Turkey and drink a few beers!  Hey, I deserve it, I went to the gym this morning for resistance/weight training and just finished an interval indoors on the bike.

Power ON! Coach Rob
Posted by Rob Muller at 2:09 PM