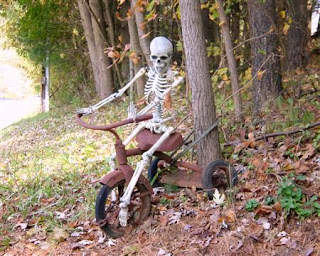 I’m sure if you’re an endurance athlete you know the meaning of the word “bonking”. And, no, I’m not talking about what the English refer to as “shagging” or “copulating”. Believe it or not, that’s what Wiki had to say about “bonking” on their website. Hopefully, you haven’t experienced it in a while because it’s NOT fun. It happened to me today on a fun training ride in Lake Placid with the TWiley IMLP group. I could list at least 10 reasons why I bonked but it could definitely have been prevented. Not only was I glycogen depleted I was dehydrated as well. And, the worst part is that the ride was only 56 miles and it wasn't a race. Granted, it was close to 4000 ft. of climbing, it was warm/humid, and I was riding with elite athletes: Todd Wiley and Rick Fesler.

I will tell you, however, what my BIGGEST mistakes were and hopefully you won’t make the same before one of your training rides- or worse a race. The first mistake, was not eating enough Carbs the night before or the morning of my ride…not to mention the ride itself. The second mistake, was not taking enough fluids in on the ride. Two bottles is not enough for me since I sweat like a pig. I should have stuffed a third bottle in a back pocket. Traditionally, the weather in Lake Placid is cool in May. Today it was warm and humid. The third mistake was trying to match the pace of the elite athletes I was riding with for 2/3 of the ride.

I started bonking 2 hrs. into a 3 hr. ride. I was cooked at the 2.5 hr. mark. It was NOT fun. In fact, it was ugly. If it wasn’t for Rick Fesler’s fiancé Christina letting me draft her 12 miles back to the hotel I would have had to call Todd Wiley to come pick me up. (Thanks Christina) That’s how bad I bonked. When I got back to the hotel I consumed a lot of Powerade which helps replenish electrolytes lost in sweat: Sodium, Potassium, Calcium and Magnesium. I also downed a liter of water. It really helped revive me. I also downed a PowerBar Protein bar to help repair the microtears in my quads and calves. My calves were cramping so bad. I couldn’t sleep. Every time I started to fall asleep the calf muscle would cramp. It was terrible.

Tonight I had a good pasta dinner which should top off the Carb levels. I’ll be sure to have a good carb breakfast in the a.m. and start hydrating BEFORE the ride. I might even find some room for a third bottle on my bike or person if I ride the same distance tomorrow. I’ll be sure not to ride at the same intensity either. If the big boys take off, I’ll let em..instead of chasing them down.

Bonking can happen to anyone at anytime if you’re not properly fueled and hydrated. Yes, it can happen to you…but after reading this blog (hopefully) you won’t let it happen to you. Power ON! Coach Rob
Posted by Rob Muller at 8:46 PM