Play the hand you're dealt! 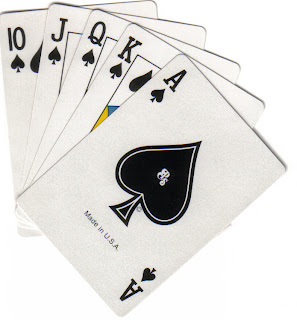 I really believe the saying, "PLAY THE HAND YOU'RE DEALT" not only applies to life in general, it applies specifically to cycling.

Genetics plays a huge role in how successful you are in cycling.  If you're fortunate to have Olympic Athletes as parents, like Taylor Phinney has, there is no wonder why you too can't be an Olympic athlete someday.  As far as I'm concerned, Taylor was dealt a Royal Flush.  For the average mortal cyclist reading this blog (unless you're an elite athlete) we're lucky if we were dealt a pair of 10's in comparison.  Why do I say that?  Because if we trained hard everyday for 5 yrs. straight (with the best coach in the world) we still wouldn't be able to come close to matching the cycling accomplishments/performances of a Taylor Phinney..even if we were the same age.

So, what makes a Taylor Phinney genetically superior to us weekend warriors?  For starters, he probably has a huge VO2max (engine), his muscles clear lactate faster than the average Joe, i.e. a higher lactate threshold, a high power-to-weight ratio, a good ratio of Slow Twitch to Fast Twitch muscle fibers, etc.  I want to talk a little bit more about the muscle fiber types since I believe it relates more to our cycling training/racing...and the title of the blog.

Slow Twitch (ST) muscle fibers (aka Type I) have slow contraction times (thus the name) and are slower to fatigue than Fast Twitch (FT) muscle fibers.  Fast Twitch muscle fibers (aka Type II) have faster contraction times and are quicker to fatigue.  The big difference between the two are that the ST fibers use Oxygen and Carbs/Fat for energy production where the FT fibers do NOT use Oxygen and only use Carbs for energy production.  The FT fibers also produce lactic acid as a byproduct of energy production.  And, I think we all know what lactic acid feels like in our legs during short/hard efforts.

For most of us, our bodies are composed of a 50/50 ratio of FT to ST muscle fibers.  Some people have an 80/20 ratio of FT to ST or ST to FT.   The ratio differs not only throughout the body but in the individual muscle group itself.  For example, I'd say I have a 50/50 ratio of FT to ST muscle fibers in my body.  But, I know that my tricep muscles are probably 80% FT and 20% ST muscle fiber and my quadricep muscles are probably 20% FT and 80% ST muscle fiber.  How do I know that?  (No, I didn't have a muscle biopsy performed- which by the way is the only REAL way of knowing what your muscle fiber composition is.)  It's because when I was on my HS Football team I could throw a football 65-70 yds and when I was on Penn State's Track Team I threw the javelin over 220 ft.  Since throwing a football and the javelin primarily uses the tricep muscle (as well as the hips/legs) and requires fast explosive action..I can pretty much tell that it's made up of FT muscle fiber.  Now, for my poor excuse for quadriceps.  Back in HS my 40 yd. sprint time was probably the slowest of the defensive backs on the football team.  I'm not sure of the exact time but I'm guessing it was closer to 5 seconds than 4 seconds..haha.  And, when I played HS basketball (at 6 ft. tall) I could barely get my wrist over the rim (let alone dunk).  I definitely suffer from the white mans disease..can't sprint and can't jump.

While you may never be an Olympian (not in the cards) understanding how your muscles work might allow you to revamp your cycling training.  If your leg build is more fast twitch muscles and you are attempting to ride long hilly distance road races and find that you never succeeded, think about possible transitioning to more of a shorter distance flat criterium racer. If you are more of a slow twitch person and you cannot figure out why you can never compete for that final sprint I highly recommend you change your goals to competing in a long hilly road race instead- where most of the pure sprinters are spit out the back.

Whatever your body type, the more you understand about it the better off you will be when you are attempting to reach your 2011 goals.  Play the hand you're dealt...don't fight it!