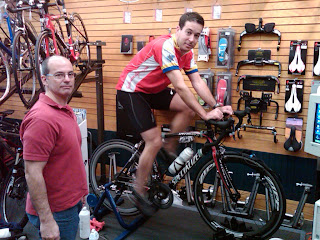 BTW, Jim Ludovici was a former athlete of my coaching service and learned pretty much everything I have over the years..and it shows. Great ride Jim.


Other than Todd and Jason, if you think you can beat Jim's time...head-on down to HRC (or sign-up on Bike.reg) and sign-up for Snowlogue 2010..I think it runs through February.