Did you get your flu shot this year? 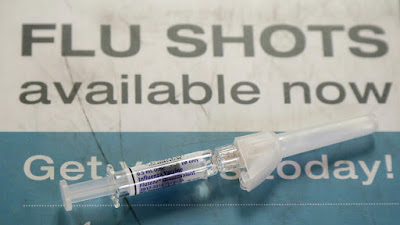 Did you get your flu shot this year?  I just did.  Better late than never huh?  Unless you've had your head in the sand the last couple weeks you may have heard that this is the worst flu season nationally in quite some time.  Numerous people have died in California alone since November.  And, it's not just the young and old that's affected..it's any age.  Just this weekend a healthy 21 yr. old aspiring personal trainer from Western Pennsylvania died.  He was coughing and running a fever..that's it.  He had some mild chest pain.  He thought he could just rest and ride it out..instead he died.

You'll read reports that this years flu vaccine is only 10% effective.  That's not entirely true.  Each year vaccine manufacturers travel to the Far East and Australia to sample thousands of people to predict which viruses are likely to spread to the USA.  Their vaccines target the best guesses.  Each vaccine targets 3 or 4 types of the Flu.  This year, 2 of the 3 most common strains vaccinated against were accurate guesses.  People who were vaccinated are 70% immune from those 2. One strained missed, and you're only 10% immune to that one.  So, you're definitely better off getting the flu shot than not.

I read an interesting article/study the other day that said if you exercise for 90 minutes after receiving your flu shot, it will improve the efficacy/potency of the shot.  That is, it will make your immune system even stronger.  They said it has to be 90 minutes, not 30 minutes or 60 minutes.  Google it.

So, what can you do to decrease your chances of getting the Flu?  First, get the Flu vaccine.  It's not too late.  I read another interesting article the other day that said that people who get routine annual Flu shots are less susceptible of getting the Flu than those that get a Flu shot every blue moon.  Secondly, stay away from anyone sneezing or hacking up hair/flem balls.  If they're at work, tell them to go home before they infect the entire office.  Thirdly, wash your hands often and keep your hands away from your face.  Fourthly, drink plenty of fluids and get plenty of sleep.  Fifth, continue to exercise at a moderate  intensity.  If you do workout, workout at home.  Gyms are a petri dish of germs during the Flu season especially if you're a member of the YMCA that has kids.  Flu season is not the time for intense workouts that may weaken your immune system.  If you do get sick, monitor your temperature.  Take Tylenol or Ibuprofen.  If you're coughing, have aches and pains and have a fever for more than a day..go to the doctors.