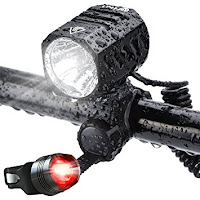 I have to admit that bicycle lights have gotten much better (brighter and longer life) and much cheaper over the years.  I bought my first night light (made specifically for bicycles) about 10 yrs. ago.  It was the creme-de-le-creme of bicycle lights made by neighboring Princeton-Tec, in New Jersey.  I'm not sure of the lumen output but I know it pales in comparison to today's lights.  And, I know for a fact I paid well over $200 for the light.
Today, there are so many bicycle lights to choose from but the one that caught my eye recently was made by Te-Rich.  It's a 1200 lumen Cree LED light which gives approx. 5 hrs. of running time on high power.  Trust me when I say this, 1200 lumens is a LOT of light.  In fact, it will light up an entire road for approximately 50 yds.  That is phenomenal.  And, the best part is, it's only $32 from Amazon.  That's right $32.  How can you beat that?  And, there's more! haha.  The light is waterproof, it's rechargeable and it even includes a back light (red).  For $32 I can afford to buy 7 of these for the price that I paid for my Princeton Tec light.  And, I'll bet the lumen output on my Princeton-Tec is no more than 200-300 lumens.  I've read a bunch of positive reviews of this light on Amazon so I know it's the real deal.  Like I said, even if you buy a bad one, you'll have enough money to buy 6 more and still have paid less than what I paid for my Princeton Tec 10 yrs. ago.

I'll be purchasing this light in the next week or so.  When I get it, I'll do a follow-up review.  Until then, Power ON!  Coach Rob
Posted by Rob Muller at 9:57 AM