Never too old or out of shape to ride/race 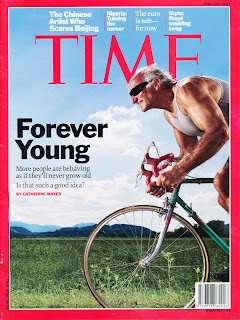 Wow..it's been a while since I've updated my blog.  What's worse, it's been even longer since I've been on my bike.  This past year was anything but ordinary: I built a house in the Pocono Mtns of PA on Lake Wallenpaupack and I worked for three different companies.  Yes, that's right, THREE!  As a result, I had little to no time for riding..let alone training.  When I worked in Philadelphia (at the Navy Shipyard) I was up at 5am and out the door at 5:20am.  I didn't return home until 4:30pm (and trust me), the last thing I wanted to do when I got home was get on a bike and ride.  It was much easier to grab a glass a wine (or a beer) and take a quick cat-nap on the couch before my wife came home from work.  Ride after dinner?  Forget about it..by the time dinner was over it was near 7pm..and I had no energy.  Besides, I was in bed by 9:30pm, ready to do it all over again the next day.

I've been off the bike for about a year now.  To be honest, I've been lucky with my health.  Other than gaining 20 lbs. since I stopped racing..I'm in "excellent" health (at least that's what my latest Physical Exam said- Thank God).  I haven't taken a prescription drug in close to 10 yrs.  I attribute that to riding/racing, eating well..and relatively good genes.  Now that the house at the Lake is finished, and now that I have a stable job (stable is a scary word in this economy) it's time to get back in the saddle.  I know it's going to be tough to get back "in-shape".  After all, I'm no spring chicken.  I'll be 54 yrs. old in less than 6 mos.  When I say "in-shape" I'm talking "racing" shape.  If you race, you know there is a BIG difference between being "in-shape" to ride with your buds in a group ride and being "in-shape" to race.  To get back into "racing shape" I know I'm going to have to lose the 20 lbs. I gained, and I'm going to have to increase my FTP back up to 275w..as a minimum.  Right now, I don't even want to guess what my FTP is.  Rather, I don't even want to know what my FTP is because it will probably de-motivate me.

For me, I need goals to motivate me to accomplish anything in life.  Cycling is no different.  If I don't set a goal, then I'm NOT going to get there.  So, as of tonight, my goal is to compete at the Tour of the Battenkill for the 2014 Season and hang with my group to the finish?  2014?  Yes, I'm skipping 2013 for two reasons: 1) I know it's too soon for me to get back into racing shape and 2) for the 2014 season I'll be riding in the Masters 55+ Category.  Wow, just typing that makes me feel old..ha.  The Tour of the Battenkill is the same race I competed in 2011 and crashed 10 miles into the race.  I completed the race on my own..solo (completely glycogen depleted and dehydrated), because I was never able to catch back on to the 50+ Masters Race Group and draft.  And, I never thought I'd be out on course a 1/2 hour longer than planned.  I trained hard for that race, harder than I ever trained for a race.  Power-to-Weight ratio was up (w/kg=3.7).  For me, that's a good watts per kg- smack in the middle of Cat 3 power.  I was at my all-time low weight too..since high school.

So, I'm off and riding..on the trainer that is.  I started this week.  I'm taking it easy for starters..nothing but Tempo miles on the trainer..with an occasional Threshold effort.  When my heart rate starts nearing LT, I back it down or terminate the ride after 20-30 minutes.  Easy does it.  Hell, my a$$ hurts from riding every night for less than 30 minutes.  I've got to get that hardened again. ha  I'm looking forward to cross-training over the Winter.  I can't wait to get back in the gym and can't wait to go X-Country Skiing up at the Lake House.  Not to mention Mtn Biking.  I love Mtn Biking in the Winter because the speeds are much lower and it's not as cold as riding 20+ mph on the open roads with a road bike (which are usually all salty, cinders/gravel, etc.).  I love Mtn Biking when there is 1-2" of fresh snow on the ground and the sun is out.

If you're in a similar boat as me..been off the bike for a while and need some motivation to get back on..email me at mullerrj@gmail.com  We can share each others pain.  You're never too old to get back in-shape either.  It will just take a little bit more time.  Forever young!