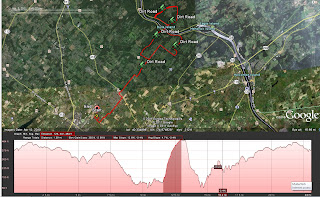 Each Spring a series of one-day bike races in Western Europe helps define the leaders for the upcoming season of professional cycling.  These races are usually held in everything but the best of conditions: cold, mud, rain, cobblestones, steep hills, etc.  These are the legendary "Spring Classics" which have been run for a hundred years or more.

Tomorrow, April 3rd, 2011 is the Tour of Flanders.  The Tour of Flanders is noted for its rough conditons: steep climbs and cobbled roads combined with normally cold and rainy weather to create a miserable racing experience.  Held in Flanders, Belgium, this race draws thousands of fans.  If you've ever been to Belgium in the Spring, as I have, you'll know that it it typically cold and rainy..making for a tough day of bike racing.

In the USA the Spring Classics have caught on in popularity as well- although not as legendary/famous as the Western European races.  Next weekend is the "Queen of the Classics" in the States- the Tour of the Battenkill held in Battenkill Valley, NY.  It is one of the toughest one-day races in America.  The course contains steep hills, dirt/gravel roads, and typically wet conditions.  Just yesterday, the Battenkill Valley received over 6 inches of snow..which will make for wet/muddy roads on race day next weekend.  The race had over 2000 registrants in the first 24 hrs. this year..and seems to get bigger (and better) each year.

For those of you that don't race, Kermesse Sports (run by my friend Brian Ignatin) hosts Spring Classics local to Bucks and Hunterdon Counties.  These are not races..they are challenging rides (that some race).  For 2011, Brian has scheduled 3 rides: Hell of Hunterdon, Fools Classic, and Fleche Buffoon.  The Hell of Hunterdon was last weekend, the Fools Classic today, and the Fleche Buffoon in two weekends (following the Tour of the Battenkill).  You can register for the Fleche Buffoon at Bike Reg.   You can find more information on his website: http://flechebuffoon.com/

If you don't think you can make one of Brian's rides..why not create your own Spring Classic.  Just today, I made up my own Spring Classic of sorts.  (Actually, for me, it was a warmup ride for next weeks Tour of the Battenkill).  It was a 1 1/2 hr. ride that included 5 dirt road sections (that were muddy w/ potholes), nearly 2,000 ft. of climbing, etc.  The good thing, for me at least, was the temps were in the mid 50s.

If you've never ridden your bike on dirt/gravel roads, you really don't need a cyclocross bike or mountain bike.  A road bike with wider (durable) tires is all you need.  I prefer Continental 4 season tires that are 25mm wide.  What I like about riding on dirt/gravel roads is picking the smoothest/fastest line around potholes, mud, stones, etc.  It's kind of like skiing moguls..where you need to pick the best line for the smoothest/fastest run without getting thrown around.  What I don't like about riding on dirt/gravel roads, however, are the washboard bumps that send shocks up my spine (a spine that already has two herniated discs).  But, a good set of eyes will help avoid such shocks.

The weather is finally starting to feel like Spring with temps exceeding 50F...and periodic rain.  So, get out there and ride some of the dirt/gravel roads in your area. It's great training for summer riding..especially if you ever get caught out in the rain.

If you want a copy of the course I rode today (shown above), send me an email and I'll send you the GPS file.  Have fun! Power ON! Coach Rob
Posted by Rob Muller at 11:38 PM