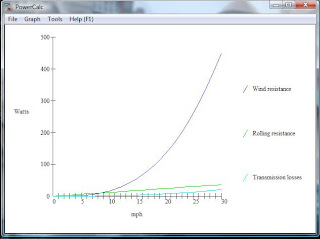 Ahh..the need for speed. How do you get "speed" on the bike? Easy..pedal faster and harder. How can you tell how fast and hard you're pedaling? Your Power Meter silly. Don't have a Power Meter yet? Why not? I bet you have the latest kit and newest wheel set- don't you?
But, did you ever sit down and think about what's required to go a certain speed? It's really quite simple. All you need to know is how many watts you produce (uh oh, there's the Power Meter thing again) to go the speed that you currently go.

Here's an example: say you did an 8 mile Time Trial in Philly last year in your best aero position and you reviewed your Power Meter data to see that you averaged 24 mph with an average maximum sustained power of 270 watts. Well, ever wonder what the power requirement is to go 25 mph in your same "best aero position"? It's really quite simple to calculate since there are a bunch of Power Calculators on the internet..most FREE. Go to http://www.analyticcycling.com/ In this example, to average 25 mph you'd have to generate (and average) 300 watts. So, that's 30 more watts per 1 mph. (Did you know that you have to double your power requirement to go from 20 mph to 25 mph? Yup..no kiddin) A 30 watt/year increase doesn't sound like much but believe me it is...especially in elite and/or seasoned athletes. If you still don't believe me, ask an elite athlete how much they improved their Functional Threshold Power (FTP) on the bike from last year's peak.
Ok, so maybe increasing your FTP 30 watts from last year to this year is reaching a little too much. There ARE other ways to go faster..than pedaling HARDER and FASTER and that's to get MORE AERO. After all, 90% of the resistance that you're pedaling against is wind resistance. So, instead of trying to "muscle" through the wind (HARDER and FASTER) why not try to "slice" through the wind. Sounds easy..huh? Well, if you're thinking like I am..the next logical question would be: "how do I get more aero"? Do I have to buy a $5000 Time Trial bike to get more aero? I can't say it won't help/work, because it will..but before you blow $5k on a TT bike there are other things that you can do with your road bike + aero bars...and that is reducing your frontal area and drag coefficient..better known as CdA.

CdA will be the topic of the next blog..so stay tuned for more. Coach Rob
Attached is a graph of Power Requirement vs. Speed for the example above.
Posted by Rob Muller at 9:50 AM