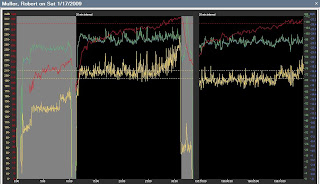 I don't know how many of you train indoors (in the Winter) and don't have a cooling fan nearby- but, I'm betting a lot of you don't. I'll give you two good reasons why having a fan nearby is important- the latter reason being more important:
1. a cooling fan will reduce the amount of sweat that drips off your head/body onto your $3000+ bike. I'm amazed at the number of bikes I see that have corroded bolts on their handlebars/stems. Ask anybody that works in a bike shop about it and I'm sure they'll tell you stories about broken handlebars, etc. BTW, it's pretty cheap insurance to drape a small towel on your stem/handlebars/toptube when working out to catch the sweat.
2. a cooling fan will allow you to do more work at the same heart rate. I've included a graph (above) which shows two 20-minute intervals. The first interval was performed at an average of 210 watts with a cooling fan ON. The average heart rate for that effort was 165 bpm. The second interval was performed at an average of 195 watts WITHOUT a cooling fan. The average heart rate for that effort was also 165 bpm. So, you can see, that I was able to average 15 more watts over a 20-minute period with the cooling fan running- at the same heart rate.
So, you can see I was able to get more work in with the cooling fan running. BTW, both of these intervals were with the same amount of rest and hydration levels beforehand..so all other external environmental factors were equal. If you don't believe me, you can do this test at home yourself- provided you have a Power Meter. Do two 20-min intervals at whatever given wattage you want. i.e. 150 watts, 200 watts, 250 watts, etc. Do the first interval on Day 1 for 20 min. with the fan ON. Do the second interval on Day 2 for 20 min. with the fan OFF. I'll bet ya a beer (I like beer), your average heart rate for the 20 min. interval will be lower with the fan ON.
If you're not doing hi-intensity indoor interval training with a fan, start now..you'll get more work in per given unit of time, thus, getting stronger faster.
Posted by Rob Muller at 10:24 AM